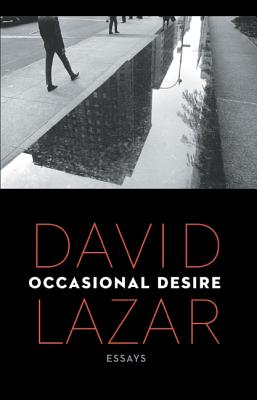 In his new collection of essays, Occasional Desire, David Lazar meditates on random violence and vanished phone booths, on the excessive relationship to jewelry that links Kobe Bryant and Elizabeth Taylor, on Hitchcock, Francis Bacon, and M. F. K. Fisher. He explores, in his concentrically self-aware, amused, and ironic voice, what it means to be occasionally aware that we are surviving by our wits, and that our desires, ulterior or obvious, are what keep us alive. Lazar also turns his attention on the essay itself, affording us a three-dimensional look at the craft and the art of reading and writing a literary form that maps the world as it charts the peregrinations of the mind.

Lazar is especially interested in the trappings of memory, the trapdoors of memory, the way we gild or codify, select, soften, and self-delude ourselves based on our understanding of the past. His own process of selection and reflection reminds us of how far this literary form can take us, bound only by the limits of desire and imagination.

“David Lazar is both a charmer and a challenger. His supple, cultivated mind is constantly moving, full of surprises; his puckish wit and exacting standards raise the bar for all contemporary literary nonfiction. This is an exciting collection, drawing strength from both the grand essay tradition and the cutting edge, and it is highly recommended.”—Phillip Lopate, editor of The Art of the Personal Essay

“David Lazar is a master of shimmering threshold moments, where acts of assertion and discovery face off (or is it hold hands?). Offering startling intimacies, gentle beckonings, and the severities of hard-won truths, Lazar is fearless about this core belief: investigations of form and self are one and the same adventure.”—Lia Purpura, author of Rough Likeness: Essays

“The spirits of past masters (Montaigne and Charles Lamb among them) animate and infuse the enthralling essays of David Lazar, a succinct virtuoso, whose gift is rueful, charm-filled introspection. His recollections and avowals unfurl with stellar melodiousness, and with a skilled comic’s perfect timing.”—Wayne Koestenbaum, author of Humiliation

"Jagged pieces of a mirror that reveal a quirky, informed and immensely curious character."—Kirkus

"I won’t be forgetting about this book anytime soon."—Michael Buening, PopMatters

David Lazar is a professor of creative writing and English at Columbia College, Chicago and the founding editor of Hotel Amerika. His works include After Montaigne: Contemporary Essayists Cover the Essays, The Body of Brooklyn, Powder Town, and Essaying the Essay.