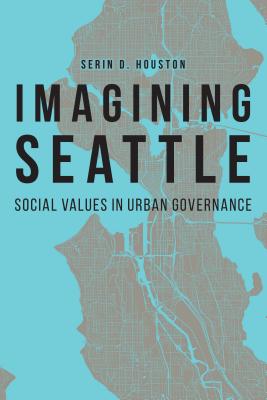 Imagining Seattle dives into some of the most pressing and compelling aspects of contemporary urban governance in the United States. Serin D. Houston uses a case study of Seattle to shed light on how ideas about environmentalism, privilege, oppression, and economic growth have become entwined in contemporary discourse and practice in American cities. Seattle has, by all accounts, been hugely successful in cultivating amenities that attract a creative class. But policies aimed at burnishing Seattle’s liberal reputation often unfold in ways that further disadvantage communities of color and the poor, complicating the city’s claims to progressive politics.

Through ethnographic methods and a geographic perspective, Houston explores a range of recent initiatives in Seattle, including the designation of a new cultural district near downtown, the push to charge for disposable shopping bags, and the advent of training about institutional racism for municipal workers. Looking not just at what these policies say but at how they work in practice, she finds that opportunities for social justice, sustainability, and creativity are all constrained by the prevalence of market-oriented thinking and the classism and racism that seep into the architecture of many programs and policies. Houston urges us to consider how values influence actions within urban governance and emphasizes the necessity of developing effective conditions for sustainability, creativity, and social justice in this era of increasing urbanization.

Serin D. Houston is an assistant professor of geography and international relations at Mount Holyoke College.

"Imagining Seattle is a book about the distance between the Seattle that we mythologize to ourselves and to others and the real Seattle that we actually live in every day. . . . Perhaps with the help of deeply researched, rigorous academic texts like Imagining Seattle, we can break through this distance between the imagined and the real."—Paul Constant, Seattle Review of Books
— Paul Constant

"Imagining Seattle helps us imagine our own cities and how they must appear to those left out of decision-making and suffering from inequities."—Wayne Feiden, Journal of Planning Literature
— Wayne Feiden

“How do the normative policy goals of sustainability, creativity, and social justice end up deepening racialized and class-based inequities in a progressive, values-driven city? Houston’s searching ethnographic and narrative analysis highlights the deep impacts of racism, whiteness, and classism that permeate urban governance and how they are accentuated by neoliberalism.”—Julian Agyeman, professor of urban and environmental planning and policy at Tufts University
— Julian Agyeman

“Serin Houston’s searching analysis reveals that seemingly forward-looking urban policies can often reproduce patterns of racial and class privilege. This important and impeccably researched book lays bare the challenges that confront cities like Seattle that aspire to be genuinely progressive places.”—Steve Herbert, Mark Torrance Professor of law, societies, and justice and professor of geography at the University of Washington, Seattle
— Steve Herbert

“Comparing urbane invocations of social justice with the actual expanding experience of urban inequality, Serin Houston’s Imagining Seattle invites us to come to terms with how a city can creatively and even caringly talk left while walking right. Her careful research thereby also offers a model for how critical geographical work can contribute to a radical reimagination of urban governance that is more modest and honest at the same time.”—Matt Sparke, professor of politics at the University of California, Santa Cruz
— Matt Sparke

“Houston thoughtfully examines how the quest for core social values—sustainability, creativity, and social justice—is importantly influenced by perspective. She provides a compelling view of the complexity of urban change in Seattle.”—Susan Gooden, professor of public administration and policy at Virginia Commonwealth University
— Susan Gooden

“Houston’s work offers valuable documentation and analysis of the City of Seattle’s efforts to advance racial equity. Lessons learned from Seattle’s experience over the last fifteen years are critical for the rapidly expanding movement of local government across the country working to advance racial equity and create a multiracial, inclusive democracy. These issues are critical for the future of our country.”—Julie Nelson, senior vice president of programs at Race Forward, codirector of the Government Alliance on Race and Equity, and former director of Seattle’s Office for Civil Rights
— Julie Nelson
or
Buy Here
Copyright © 2020 American Booksellers Association