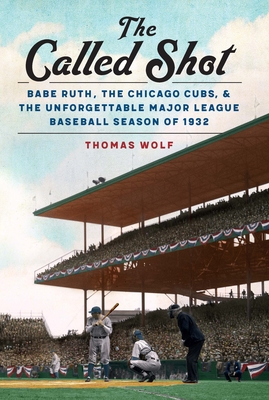 In the summer of 1932, at the beginning of the turbulent decade that would remake America, baseball fans were treated to one of the most thrilling seasons in the history of the sport. As the nation drifted deeper into the Great Depression and reeled from social unrest, baseball was a diversion for a troubled country—and yet the world of baseball was marked by the same edginess that pervaded the national scene.

On-the-field fights were as common as double plays. Amid the National League pennant race, Cubs’ shortstop Billy Jurges was shot by showgirl Violet Popovich in a Chicago hotel room. When the regular season ended, the Cubs and Yankees clashed in what would be Babe Ruth’s last appearance in the fall classic. After the Cubs lost the first two games in New York, the series resumed in Chicago at Wrigley Field, with Democratic presidential candidate Franklin Roosevelt cheering for the visiting Yankees from the box seats behind the Yankees’ dugout.

In the top of the fifth inning the game took a historic turn. As Ruth was jeered mercilessly by Cubs players and fans, he gestured toward the outfield and then blasted a long home run. After Ruth circled the bases, Roosevelt exclaimed, “Unbelievable!” Ruth’s homer set off one of baseball’s longest-running and most intense debates: did Ruth, in fact, call his famous home run?

Rich with historical context and detail, The Called Shot dramatizes the excitement of a baseball season during one of America’s most chaotic summers.


Praise For The Called Shot: Babe Ruth, the Chicago Cubs, and the Unforgettable Major League Baseball Season of 1932…

“[Wolf] delivers a solid and exciting look at the 1932 baseball season. . . . Baseball fans will delight in this thrillingly told history.”—Publishers Weekly, starred review

"This book has it all. It is well-written, well-researched, and full of surprises."—Mark McGee, NINE: A Journal of Baseball History and Culture

"Nearly 80 years after the event took place, a home run in the fifth inning of game three of the 1932 World Series between the New York Yankees and the Chicago Cubs is still being discussed and debated. Yankee outfielder Babe Ruth came to the plate and while being heckled by players from the Cubs dugout, he supposedly pointed to center field and proceeded to homer in the area to which he pointed. The verification of that event, while still being debated today, is only one of a number of topics about the 1932 baseball season on display in this excellent book by Thomas Wolf."—Lance Smith, Guy Who Reviews Sports Books

"Many fans know about Babe Ruth's legendary "called shot"—when, during the 1932 World Series, he pointed to the bleachers at Wrigley Field and hit a home run in the same direction. But Wolf takes the familiar sports legend (which is true, mostly) and weaves around it an engaging and insightful recounting of all that led up to that moment, and the colorful figures who played important roles in how the game—and America—played out in that dramatic year."—Chris Foran, Milwaukee Journal Sentinel

"Wolf presents a fascinating study, well-researched and the story of the entire season erupting at that point equally remarkable."—Andy Esposito, NY Sports Day

"The Called Shot is a satisfying read and provides depth and context to a memorable baseball season. As the reader will discover, the 1932 season was more than just Babe Ruth’s most iconic moment."—Bob D'Angelo, Sports Bookie

"[The Called Shot] is a fun read and gives great insight on what life was like in Chicago in the early 1930s, both what it was like being a Cubs fan, and life in general."—Al Yellon, Bleed Cubbie Blue

"A fun, well-researched, compellingly told and substantively rich work. I don't know if Tom Wolf pointed to the bleachers or not before he sat down to write this book, but he definitely hit a home run."—Lincoln Mitchell, Start Spreading the News Blog

“The Called Shot provides readers a multilayered narrative of politics, pop culture, American history, and baseball. Going far beyond the games on the field, Thomas Wolf’s book gives readers a glimpse into a season they only thought they knew.”—William Steele, author of Going the Distance: The Life and Works of W. P. Kinsella

Thomas Wolf has written numerous articles on baseball history and is the coauthor of Midnight Assassin: A Murder in America’s Heartland.