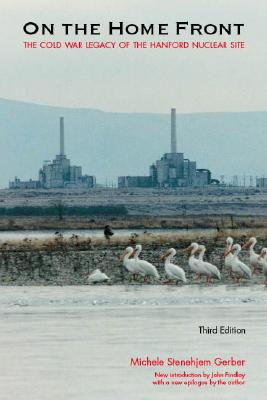 On the Home Front

On the Home Front is the only comprehensive history of the Hanford Nuclear Site, America’s most productive and wasteful plutonium manufacturing facility. Located in southeastern Washington State, the Hanford Site produced the plutonium used in the atomic bombs that ended World War II. This book was made possible by the declassification in the 1980s of tens of thousands of government documents relating to the construction, operation, and maintenance of the site. The third edition contains a new introduction by John M. Findlay and a new epilogue by the author.

Praise For On the Home Front: The Cold War Legacy of the Hanford Nuclear Site, Third Edition…

“On the Home Front should be read by everyone concerned with public policy and the environmental issues that dominate this postmodern world.” —William L. Lang, Western Historical Quarterly
— William L. Lang

Michele Stenehjem Gerber works in the Public Information Office of Fluor Hanford, Inc. She has been a member of the National Academy of Sciences Committee on Declassification and has served on the Hanford Reach National Monument Federal Advisory Committee and consulted for the U.S. Centers for Disease Control. John M. Findlay is a professor of history at the University of Washington and the coeditor of Parallel Destinies: Canadians, Americans and the Western Border and The Atomic West.
Loading...
or support indie stores by buying on