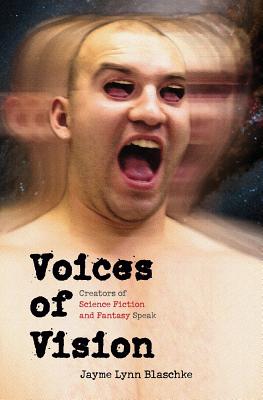 As the world around us becomes more fantastic, and science itself more surreal, the realms of science fiction and fantasy become correspondingly both more bizarre and more relevant. Voices of Vision offers a rare look into the inner workings of this realm and into the very thoughts and methods of those who make it tick: editors and writers of science fiction and fantasy, and creators of comic books and graphic novels. In wide-ranging interviews that are by turns intimate and thought provoking, irreverent and outrageous, Jayme Lynn Blaschke talks shop with some of the most interesting voices in these genres as well as the people behind them, such as current Science Fiction Weekly and former Science Fiction Age editor Scott Edelman.
A host of authors talk to Blaschke about what it’s like to do what they do, how they work and how they started, and where they think the genre is headed. Blaschke talks to writers such as Robin Hobb, Charles de Lint, Patricia Anthony, and Elizabeth Moon; revered authors of comic books and graphic novels, including Neil Gaiman and Brad Meltzer; and icons such as Samuel R. Delany, Gene Wolfe, Harlan Ellison, and Jack Williamson. Editors such as Gardner Dozois, editor of Asimov’s Science Fiction magazine, discuss their publishing philosophies and strategies, the origins and probable directions of their magazines, and the broader influence of such ventures. For devoted reader, aspiring writer, and curious onlooker alike, these interviews open a largely hidden, endlessly engrossing world.

Jayme Lynn Blaschke is a public information specialist at Texas State University–San Marcos and the fiction editor of RevolutionSF.com. His interviews have appeared in Interzone and The Science Fiction Chronicle.

Praise For Voices of Vision: Creators of Science Fiction and Fantasy Speak (Bison Frontiers of Imagination )…

“An expert savvy interviewer is a rare beast. Jayme Lynn Blaschke is just such a paragon. . . . Blaschke displays reverence, passion, and curiosity. He manages to elicit quotable moments from everyone, and dredges up insightful apercus.”—Asimov’s Science Fiction
— Asimov's Science Fiction

“Quite likely to float the boats of SF readers of every stripe. . . . Voices of Vision involves vibrant, creative types talking about things they love (and hate), which is a pretty good way to spend an afternoon.”—Revolution SF
— Revolution SF

"Let us hope that the University of Nebraska produces other books in the vein of Voices of Vision."—Aaron Parrett, Science Fiction Studies
— Aaron Parrett

“What is most engaging about this book is that it is a glimpse at the belly of the beast, so to speak—science fiction and fantasy as a business, a discipline, a means of livelihood, and a community. . . . Blaschke is an engaging interviewer. . . . Everyone will have favorites in this collection, just as everyone has favorite writers and private heroes. . . . For anyone interested in the twin genres of science fiction and fantasy, this is a treat.”—Robert M. Tilendis, Green Man Review
— Robert M. Tilendis

"Voices of Vision provides a useful look at the current and recent state of science fiction and comics from a wide range of viewpoints. Blaschke provides a more personal introduction to his subjects than is possible by reading their novels, comics or the magazines they edited. The result is a look at a vibrant genre which has broadened in both scope and appeal from the days when Jack Williamson helped found the genre."—Steven H. Silver, SF Site
— Steven H. Silver

“The quality of interviews is uniformly excellent. Blaschke asks intelligent questions and receives interesting answers, which are edited nicely for maximum impact while keeping the distinct personality of the speaker.”—Rick Klaw, LocusMag.com
— Rick Klaw

“Blaschke demonstrates that he is an insightful interviewer who is interested in asking more than just basic, run of the mill questions. . . . Blaschke’s interviews and their subjects are interesting, and while brief in length, cover a tremendous amount of ground. Voices of Vision is essential for understanding the current state of science fiction from the point of view of those who write it and publish it.”—Interzone
— Interzone

“There aren’t many interview books around these days . . . nonetheless, such books should be encouraged because they give insight into the thinking of a variety of creators. . . . There has to be someone or more in [Voices of Vision] that has to take your fancy. So, go read.”—SF Crowsnest
— SF Crowsnest

"Blaschke . . . fills something of a vacuum, then, with this outstanding collection of conversations he has had with leading sf editors and authors since 1997. . . . Must reading for devotees curious to see what makes their favorite authors tick."—Booklist
— Booklist

"Interviewing with Jayme Blaschke was an enjoyable experience. The questions were clear, well thought out, and not the run-of-the-mill interview questions. In short, it was an interview that allowed this writer to share thoughts rather than standardized facts with the reader."—Robin Hobb, author of Fools Fate and Ship of Magic
— Robin Hobb