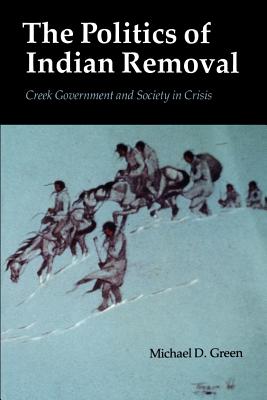 The Politics of Indian Removal

Creek Government and Society in Crisis

In the two decades after their defeat by the United States in the Creek War in 1814, the Creek Indians of Georgia and Alabama came under increasing—ultimately irresistible—pressure from state and federal governments to abandon their homeland and retreat westward. That historic move came in 1836. This study, based heavily on a wide variety of primary sources, is distinguished for its Creek perspective on tribal affairs during a period of upheaval.

Praise For The Politics of Indian Removal: Creek Government and Society in Crisis…

"This is not merely an analysis of the politics of removal, though it offers fresh insights into that much-discussed field. Rather, Green's focus is on the Creeks themselves. . . . Will become a standard reference for students of Creek history and Indian removal."—John R. Finger, Journal of Southern History
— John R. Finger

"This is an excellent study of intratribal politics, and it unquestionably will become the standard reference for Creek politics during the early removal period."—R. David Edmunds, Georgia Historical Quarterly
— R. David Edmunds

"Based on thorough documentary research, this book is a first-rate study, revealing not only much about Indians but also about whites and unsavory aspects of Jacksonian democracy."—J. Leitch Wright, Jr., American Historical Review
— J. Leitch Wright, Jr.

Michael D. Green is professor of history and Native American studies at Dartmouth College.
Loading...
or support indie stores by buying on