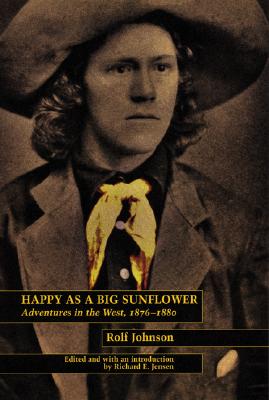 Happy As a Big Sunflower

In 1876 Rolf Johnson and his family left Illinois for Phelps County, Nebraska. There they faced the challenges of pioneering on the Great Plains: digging wells, building sod houses, plowing and planting crops, and fighting prairie fires. Johnson's diary goes beyond individual conquest, however, and provides insight into the great cooperative endeavor of plains settlement. Rolf's Swedish family and neighbors worked and socialized with other Swedes just as nearby Danish settlers remained in close physical and cultural contact with other Danish immigrants. A very eligible ninetten-year-old bachelor, Rolf also offers touching vignettes on the rituals of courting.

Abruptly, with no explanation in his diary, and with no itinerary or prospects, Rolf left home in 1879 "with the intention of going west for a season." His departure may have been sparked by the marital fervor exhibited by a female suitor. Rolf felt he was "not quite prepared to leave the state of single blessedness for that of double misery." In Sidney, Nebraska, he ran with the "sporting" element, who showed him photographs of "fast women of the town stark naked." He found employment with a wagon freighter headed for the Black Hills, where he saw Calamity Jane in action. Rolf's education continued until the diaries end in Cubero, New Mexico, in 1880. He returned to Phelps County in 1882 and remained there for most of his life. Rolf's lively diaries offer an entertaining eyewitness account of pioneer life and an unmatched resource for historians.

"This diary is in many ways as charming as its title. With the enthusiasm and innocence of young adulthood, Johnson records several years of his life as a first-generation Swedish American farmer in Nebraska and the greater Plains region. His entries vividly depicts the scenes and people of the late 1870s and early 1880s, ranging from farming to the girls he courted and the various accidents, fights, and other events common to frontier life. . . . This title will be of great interest to regional libraries."—Library Journal
— Library Journal

Richard E. Jensen is a research anthropologist with the Nebraska State Historical Society. He is coeditor of Eyewitness at Wounded Knee (Nebraska 1992) and author of numerous articles for Nebraska History magazine.
Loading...
or support indie stores by buying on