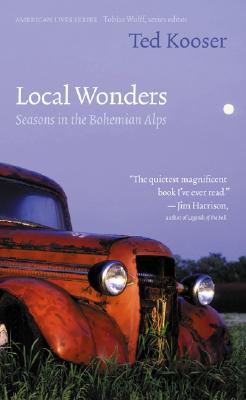 Ted Kooser describes with exquisite detail and humor the place he calls home in the rolling hills of southeastern Nebraska—an area known as the Bohemian Alps. Nothing is too big or too small for his attention. Memories of his grandmother’s cooking are juxtaposed with reflections about the old-fashioned outhouse on his property. When casting his eye on social progress, Kooser reminds us that the closing of local schools, thoughtless county weed control, and irresponsible housing development destroy more than just the view.

In the end, what makes life meaningful for Kooser are the ways in which his neighbors care for one another and how an afternoon walking with an old dog, or baking a pie, or decorating the house for Christmas can summon memories of his Iowa childhood. This writer is a seer in the truest sense of the word, discovering the extraordinary within the ordinary, the deep beneath the shallow, the abiding wisdom in the pithy Bohemian proverbs that are woven into his essays.

"When you read Ted Kooser's Local Wonders, you question where he's been all these years. He'd probably tell you he's been right here, amidst all of us, working the simplicity of words, the clarity of insights. What he wouldn't tell you is that he has the quiet ability to sneak beneath your skin and ripple it ever so slightly. . . . Set back in the hills of southeastern Nebraska–the Bohemian Alps–Kooser's book doesn't venture far geographically but travels great distances along the lengths of wisdom. . . . Kooser is a poet by nature, and his essays have the generous feel of a man who's rolled up his sleeves, pen in hand, for a long time, choosing words as an act of beauty, and knowing the small things of the world are of great import."—The Bloomsbury Review

"A quietly eloquent diary of a year in a small town in Nebraska. . . . This is a heartfelt plainspoken book about slowing down and appreciating the world around you. . . . Maybe it's exactly the feeling your friends, even you, are looking for."—New York Times book critic Janet Maslin on CBS News Sunday Morning

"Eloquent meditations on country pleasures, the rhythms of the seasons and the lingering presence of Czech folk culture in rural Nebraska."—Dan Cryer, Newsday

"Through his eyes we learn to see, then appreciate, the beauty and grace in everyday miracles, the comfort and sanctity in local wonders."—Booklist

“Kooser forges connections with the past through witty, commonsense proverbs inherited from Czech and German immigrants to southeastern Nebraska. The proverbs lend a poetic folk wisdom to the examination of his rural environs.”—Jeffrey Galbraith, Harvard Review

"Local Wonders should be read and reread. It is a treasure, like the ripe wild plums Mr. Kooser, a retired insurance executive, picks along rural Nebraska roadsides."—Dan Barber, Dallas Morning News

"In this elegaic volume of four chapters, National Poet Laureate Kooser shares with the reader a lifetime of observations about home, familiy, and land distlled into a series of sometimes sparkling, other times electrifying, and always engaging scenes that read like a poet's diary."—Mark Easter, Colorado Review

"Reading Ted Kooser's Local Wonders, I feel like I've wandered into another world, a place where the past endures—broken down a little, it's true—and where the present contains enough room to pay attention to the people and the countryside around you. This is simple, patient prose, the annotations of living in a wide-open place."—Verlyn Klinkenborg

"Ted Kooser's Local Wonders is the quietest magnificent book I've ever read."—Jim Harrison, author of Legends of the Fall

Ted Kooser is a visiting professor of English at the University of Nebraska and a retired insurance executive. His poetry has appeared in nine special collections and eight books, including Winter Morning Walks: 100 Postcards to Jim Harrison and Weather Central.
Loading...
or support indie stores by buying on