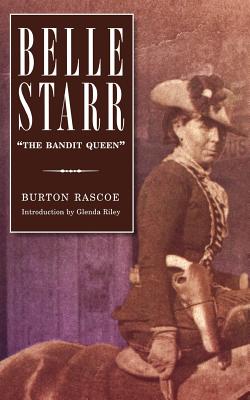 Legendary comrade and consort to train robbers, bootleggers, stagecoach robbers, bushwhackers, bank robbers, horse thieves, cattle thieves, and outlaws of all stripes, Belle Star (1848–89) was born in Missouri and emigrated with her family to Texas in 1863.

Myth made her a dancehall entertainer, faro dealer, expert horsewoman, crack shot, and adopted member of the Cherokee Nation. Was her first love Cole Younger, a cousin and associate of Jesse James, and did she bear his child in 1869? And when she settled at Younger’s Bend on the Canadian River in Indian Territory, did she really establish a haven for desperadoes, mastermind a string of criminal enterprises, and entertain a series of lovers, all of whom met with violent ends?

Did the dime novelists invent her flamboyant dress, musical abilities, literary tastes, colorful language, and determined refusal to occupy “a woman’s place”? Or was she an original free spirit whose force of personality and violation of all normal standards of conduct made her the perfect antiheroine of the Western frontier? Burton Rascoe’s classic biography separates the facts from the folklore and traces the sources and afterlives of the fictional accounts published after her mysterious and unsolved murder. Glenda Riley’s introduction adds new evidence to help get behind the layers of oral history, hyperbole, and outright lies.

Burton Rascoe (1892–1957) worked as an editor and critic for numerous newspapers and magazines, including the Chicago Tribune, Vanity Fair, Esquire, and Newsweek, and was the author of nine books. Glenda Riley is Alexander M. Bracken Professor Emerita of History at Ball State University. She is the author of Women and Nature: Saving the “Wild” West (Nebraska 1999) and Taking Land, Breaking Land: Women Colonizing the American West and Kenya, 1840–1940.

“Rascoe is smart enough to present the legend with the facts as he knows them, and in the end, only his presentation could full explain the bandit queen. It’s quite fun how he compares the truth with the outrageous cock-and-bull stories commonly found in yellow journalism.”—Meghan Saar, True West
— Meghan Saar