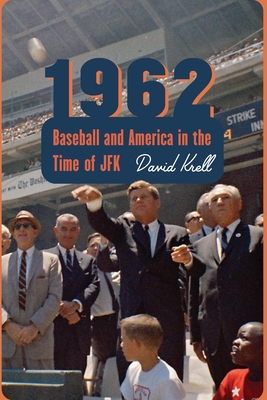 Baseball and America in the Time of JFK

In the watershed year of 1962, events and people came together to reshape baseball like never before. The season saw five no-hitters, a rare National League playoff between the Giants and the Dodgers, and a thrilling seven-game World Series where the Yankees, led by Mickey Mantle, won their twentieth title, beating the San Francisco Giants, led by Willie Mays, in their first appearance since leaving New York.

Baseball was expanding with the Houston Colt .45s and the New York Mets, who tried to fill the National League void in New York but finished with 120 losses and the worst winning percentage since 1900. Despite their record, the ’62 Mets revived National League baseball in a city thirsty for an alternative to the Yankees. As the team struggled through a disastrous first year, manager Casey Stengel famously asked, “Can’t anybody here play this game?”

Earlier that year in Los Angeles, Dodgers owner Walter O’Malley launched Dodger Stadium, a state-of-the-art ballpark in Chavez Ravine and a new icon for the city. For the Dodgers, Sandy Koufax pitched his first of four career no-hitters, Maury Wills set a record for stolen bases in a season, and Don Drysdale won twenty-five games.

Beyond baseball, 1962 was also a momentous year in American history: Mary Early became the first Black graduate of the University of Georgia, First Lady Jackie Kennedy revealed the secrets of the White House in a television special, John Glenn became the first astronaut to orbit Earth, and JFK stared down Russia during the Cuban Missile Crisis. Weaving the 1962 baseball season within the social fabric of this era, David Krell delivers a fascinating book as epochal as its subject.


Praise For 1962: Baseball and America in the Time of JFK…

"Krell should be commended for presenting so many aspects of 1962 in an interesting and understanding way. His writing and research are impeccable. This is a book you will want to pick up and read again and again."—Mark McGee, NINE: A Journal of Baseball History and Culture

"Krell’s look at 1962 hits the mark on a less recognized year that in retrospect had as many twists and turns as did the pennant races and World Series, and, like McCovey’s drive, might have ended very differently."—Jerry Milani, Sports Media Report

"Krell’s book is a nice, well-rounded view of a year that was promising and turbulent, sometimes at the same time. He goes beyond nuts-and-bolts baseball in 1962, presenting the United States as it looked midway through Camelot."—Bob D'Angelo, Sports Bookie

"Like a Ken Burns documentary woven with many voices and half-forgotten events, this history of the 1962 season in Major League Baseball covers much more than the pennant races and the World Series matchup between the Yankees and the transplanted Giants."—Outrider Reading Group

"Cultural historian Krell weaves a gripping account of a momentous baseball season, five no-hitters, an exceptional NL playoff between the Giants and Dodgers, and a seven-game World Series showcasing Mantle and Mays. All this and more against the backdrop of the Cuban Missile Crisis, the Space Race, and the Civil Rights movement."—John Vorperian, SABR Newsletter

“Cracking the spine of David Krell’s literary journey back to 1962 is like opening a time capsule on the bookshelf. Chapter by chapter, NASA, The Flintstones, Maury Wills, Bo Belinsky, and so much more are carefully unwrapped before your very eyes and exposed to twenty-first-century sunlight for what feels like the first time. In Krell’s capable hands, everything old feels new again.”—Mitchell Nathanson, author of Bouton: The Life of a Baseball Original

“David Krell has done prodigious research to bring you the events, the issues, and the famous personalities of 1962. Not only will you encounter JFK, the seven Mercury astronauts, civil rights figures, and Marilyn Monroe, but you’ll reconnect with Buddy Ebsen and the Beverly Hillbillies, the cast of Car 54, Where Are You?, and Edd Kookie Byrnes. And yes, the Yankees won the World Series.”—Peter Golenbock, author of The Bronx Zoo and Bums

“For those of us who remember 1962, we think of it as Camelot, the last year in which America was mostly at peace with itself. For those too young to remember, David Krell brings it back to life in an informative and entertaining way. Among other aspects of American culture, Krell vividly describes a baseball season that featured two new teams in the National League, a thrilling pennant race, and a World Series with a memorable ending; a year of wonderful Hollywood movies and not so wonderful tv shows; and the ups and downs of our popular young president.”—Lyle Spatz, author of 1921: The Yankees, the Giants, and the Battle for Baseball Supremacy in New York

David Krell is the author of Our Bums: The Brooklyn Dodgers in History, Memory, and Popular Culture.