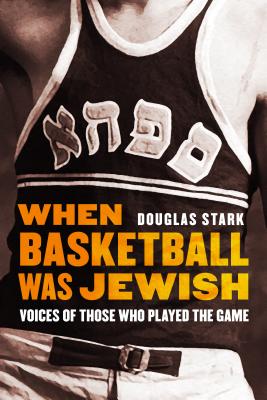 When Basketball Was Jewish

Voices of Those Who Played the Game

In the 2015–16 NBA season, the Jewish presence in the league was largely confined to Adam Silver, the commissioner; David Blatt, the coach of the Cleveland Cavaliers; and Omri Casspi, a player for the Sacramento Kings. Basketball, however, was once referred to as a Jewish sport. Shortly after the game was invented at the end of the nineteenth century, it spread throughout the country and became particularly popular among Jewish immigrant children in northeastern cities because it could easily be played in an urban setting. Many of basketball’s early stars were Jewish, including Shikey Gotthoffer, Sonny Hertzberg, Nat Holman, Red Klotz, Dolph Schayes, Moe Spahn, and Max Zaslofsky.

In this oral history collection, Douglas Stark chronicles Jewish basketball throughout the twentieth century, focusing on 1900 to 1960. As told by the prominent voices of twenty people who played, coached, and refereed it, these conversations shed light on what it means to be a Jew and on how the game evolved from its humble origins to the sport enjoyed worldwide by billions of fans today. The game’s development, changes in style, rise in popularity, and national emergence after World War II are narrated by men reliving their youth, when basketball was a game they played for the love of it.

When Basketball Was Jewish reveals, as no previous book has, the evolving role of Jews in basketball and illuminates their contributions to American Jewish history as well as basketball history.


Praise For When Basketball Was Jewish: Voices of Those Who Played the Game…

"[When Basketball Was Jewish elevates] the voices of twenty distinguished Jewish basketball players, men who played the city game with passion, precision, and pride."—AETHLON

"Douglas Stark provides an intimate look into the lives of young Jews whose athletic skills gave them an edge in society."—Fred Isaac, Association of Jewish Libraries Reviews

"When Basketball was Jewish is more than a sports record. . . . Both Jewish history and basketball enthusiasts will enjoy this fascinating record of American Jewish life and its impact on American sport."—Jonathan Fass, Jewish Book Council

"When Basketball Was Jewish reveals, as no previous book has, the evolving role of Jews in basketball and illuminates their contributions to American Jewish history as well as basketball history."—Phil Jacobs, Jewish Link NJ

“A terrific first-person account of basketball life. As I read the stories of people I knew, like Nat Holman and of course my dad, Dolph Schayes, I found myself living the stories of their time in the game. Their accounts are so real and dynamic that the game comes to life as you feel like you are experiencing it with them. A terrific read!”—Danny Schayes, eighteen-year NBA player and son of Hall of Fame and NBA top-fifty player Dolph Schayes


“The players and coaches chronicled in this book are not only important figures in Jewish basketball history; they played an important part in the history of the game. As a student of the game, a basketball lifer, and someone who is extremely proud of his Jewish heritage, I can appreciate the doors that they opened, and I’m glad that their stories are being told.”—Ernie Grunfeld, president of the Washington Wizards

Douglas Stark is the museum director at the International Tennis Hall of Fame in Newport, Rhode Island. He is the author of Wartime Basketball: The Emergence of a National Sport during World War II (Nebraska, 2016) and The SPHAS: The Life and Times of Basketball’s Greatest Jewish Team.