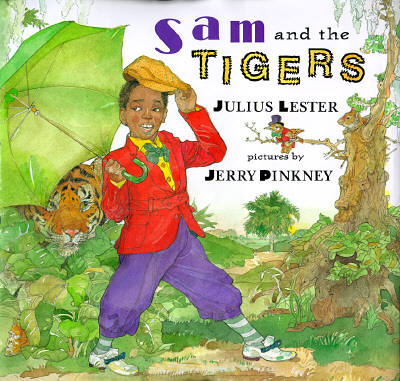 Sam and the Tigers

Caldecott Medal-winning illustrator Jerry Pinkney and Newbery Honor-winning author Julius Lester team up in thi groundbreaking and delightful update of one of the most controversial stories in children’s literature. Hailed by Publishers Weekly as “hip and hilarious.”

From the creators of the Caldecott Honor-winning John Henry comes a reimagining of Helen Bannerman’s Little Black Sambo. Julius Lester uses his inimitable black southern storytelling voice to bring new life and laughter to Sam, a little boy with bright new clothes who encounters a group of tigers on his way to school. Like his breathtaking animal illustrations in The Lion and the Mouse and The Talking Eggs, Jerry Pinkney’s tigers prowl off the page and leap into the imagination. All of the Lester and Pinkney trademarks are present: wit, humor, and the perfect marriage of words and images, making this classic folktale accessible to new generations.


“A hip and hilarious retelling that marries the essence of the original with an innovative vision of its own.”—Publishers Weekly (starred review)

Julius Lester is a celebrated author whose accolades include a Newbery Honor and a Coretta Scott King Award. He is also a National Book Award Finalist, a National Book Critics Circle nominee, and a recipient of the Boston Globe-Horn Book Award. In addition to his critically acclaimed writing career, Mr. Lester has distinguished himself as a civil rights activist, musician, photographer, radio talk-show host, and professor. For thirty-two years he taught at the University of Massachusetts at Amherst. He lives in western Massachusetts.

Jerry Pinkney is one of America's most admired children's book illustrators. He has won the Caldecott Medal and five Caldecott Honor Medals, five Coretta Scott King Awards, five New York Times Ten Best Illustrated Awards, the Society of Illustrators' Original Art Show Lifetime Achievement Award, and many other prizes and honors. Recently a member of the National Council of the Arts and inducted into the American Academy of Arts and Sciences, he has also served on the U.S. Postal Service Citizens Stamp Advisory Committee. His artwork has been exhibited in galleries and museums throughout the country, including the Art Institute of Chicago, the Philadelphia Museum of Art, the Schomburg Center, and the Norman Rockwell Museum. Jerry Pinkney lives with his wife, author Gloria Jean Pinkney, in Westchester County, New York.
Loading...
or
Not Currently Available for Direct Purchase