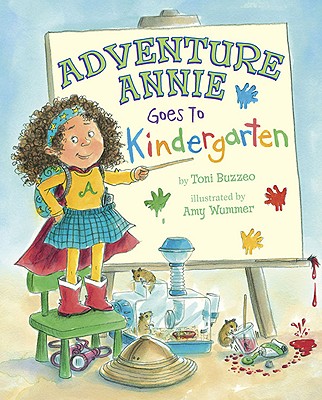 From the author of the 2013 Caldecott Honor Book, ONE COOL FRIEND!

Annie Grace wears her ?Adventure Annie? cape to her first day of kindergarten, and proceeds to barrel through the day, searching for adventure in every moment. Her interpretation of the class?s Gold Star Rules isn?t exactly what her teacher, Mr. Todd, had in mind. But somehow Annie does manage to save the day when two of her classmates get lost on their way to retrieve the afternoon snack. Spirited and funny, this is an introduction to kindergarten that will please kids and teachers alike.

“Humor and high spirits. A fine addition to the Adventure Annie series.”—Booklist

Toni Buzzeo, the acclaimed author of 20 picture books as well as 11 books for educators, was born in Dearborn, Michigan and grew up in the Dearborn Public Libraries, reading nearly every book in the children's and young adult sections of the Snow Branch library before taking a job downtown at the Main library as a Library Page and then a Library Assistant to put herself through college.

After earning a BA and MA in English from the University of Michigan, she worked for a decade as a college and high school English teacher. She then earned an MLIS from the University of Rhode Island and returned to libraries as a school librarian. She was named Maine Library Media Specialist of the Year in 1999 and continued to work as an elementary school librarian while she launched a successful writing career.

In 2013, Toni's New York Times best-selling book One Cool Friend, illustrated by David Small, won a Caldecott Honor. It also won the Maine Literary Award for Children's Books from the Maine Writers and Publishers Alliance in the same year.

Since her first book, The Sea Chest, won a Maine Lupine Honor in 2003, Toni has received many other awards for her books, including a 2004-2005 Children's Gallery Award, also for The Sea Chest, and the 2012 Time of Wonder award for Lighthouse Christmas. Her books Dawdle Duckling, Little Loon and Papa, and One Cool Friend have been chosen by the Dolly Parton Imagination Library for international distribution to young children. Just Like My Papa, Stay Close to Mama, and Dawdle Duckling have all been Children's Book of the Month Club selections as well. Toni currently has four more picture books under contract.

Toni is a bit of a vagabond, writing in a charming writing cottage built by her husband on 35 acres of a colonial farm in Buxton, Maine, writing at the Cambridge Public Library near her grandbaby in Massachusetts, and slipping down to write in her sunny winter nest in Sarasota, Florida when the weather turns blustery at home.

A well-known speaker, Toni speaks extensively in schools as well as at conferences and district and regional professional development trainings, both nationally and internationally. Visit her website at www.tonibuzzeo.com.