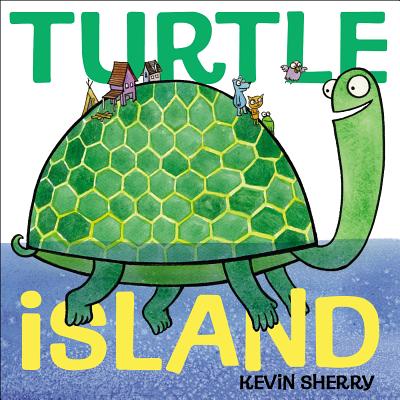 From the award-winning creator of I'M THE BIGGEST THING IN THE OCEAN comes an inspiring tale of friendship and belonging that's perfect for fans of THE SNAIL AND THE WHALE, OWEN AND MZEE, and Oliver Jeffers's LOST AND FOUND.

Turtle is big. But the ocean is bigger. And Turtle is all alone. Until four shipwrecked folks--a bear, an owl, a frog, and a cat--climb to safety on his shell. Before long, they're fast friends, and the sea doesn't seem so vast anymore. But when Frog confides that he misses his family, Turtle doesn't understand. Isn't he their family? And when the group decides to sail for home, will Turtle be left behind? Never fear--a surprise on the horizon promises friends, family, and a home at last. Uplifting and heartfelt, this is a book about the power of friendship and making a home of one's own.

Kevin Sherry is not only the talented author/illustrator of many books for kids, he's also a chef, a puppeteer, and a cyclist. You can find him in his awesome fort in Baltimore, Maryland, working, playing, and always creating.

“Sherry’s simple but touching first-person narrative is well suited to its young audience . . . The wide-eyed animals have friendly faces, and the snug details of the home (and eventual town) they create on the turtle’s back will pique the interest of youthful viewers. . . . [S]it back and enjoy this whimsical, watery world.”—BCCB

"Sherry uses brilliant, speckled watercolor washes for the ocean and sky, while the creatures are rendered in simple, colorful shapes with thick outlines and cartoonishly big eyes. Lovable Turtle and his happy, friend-filled future will likely strike a chord with little ones feeling lonely."—Booklist

PRAISE FOR I'M THE BIGGEST THING IN THE OCEAN:
"Waves of exuberance flow out of this crowd-pleaser, in which a squid proudly points out how much bigger it is than any shrimp, clam, octopus or fish in the neighborhood."--Kirkus, starred review

"Sherry renders his hero and habitat in bright colors and bold, simple shapes that will be surefire eye magnets for preschoolers. . . ."--Publishers Weekly, starred review

NYPL Titles for Reading and Sharing