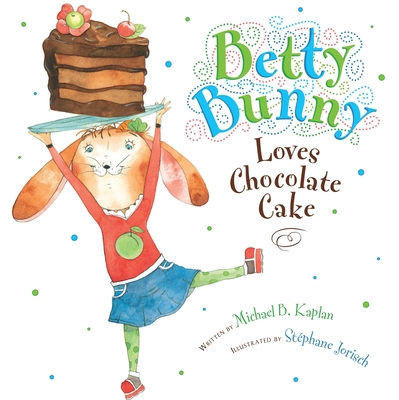 “I'm going to marry chocolate cake!' states Betty Bunny after she tries her first piece, and who can blame her? Once Betty Bunny has discovered the wonderful goodness of chocolate cake, it is all she wants, and she has problems being apart from it. The illustrations of Stephane Jorisch bring Betty Bunny's adventures with her precious chocolate cake to life, and the situations she gets herself into will have you and your child laughing out loud. This is a hilarious tribute to the most wonderful food out there, and to all of the picky eaters who won't try anything new.”
— Amber Sentance, Vero Beach Book Center, Vero Beach, FL
View the List

From author Michael B. Kaplan, creator of Disney’s T.V. show Dog with a Blog, comes the debut picture book of the Betty Bunny series. It's a story about patience—seen through the eyes of a precocious preschooler.

Betty Bunny is the youngest in her family of rabbits and she’s just discovering the important things in life, like chocolate cake. She declares, “I am going to marry chocolate cake” and takes a piece to school with her in her pocket. Mom values healthy eating and tells Betty Bunny she needs patience when it comes to dessert. But Betty Bunny doesn’t want patience, she wants chocolate cake! In this funny tribute to chocolate lovers (and picky eaters), Betty Bunny’s charming perspective on patience will be recognizable to anyone with a preschooler in their life.

* “A spunky bunny girl, whimsical watercolor illustrations and a laugh-out-loud plot are the key ingredients for this sweet and satisfying treat of a story.”—Kirkus Reviews, starred review

"The illustrations in this book are created as beautiful watercolors and ink drawings that vividly support the storyline and enhance the humor of the text. This is a fun book for young readers."--Children's Literature

"Readers will delight in feeling older and wiser than Betty, and both Jorisch (New Year at the Pier) and debut talent Kaplan demonstrate a sure handle on feisty modern family dynamics."--Publishers Weekly

A native of Wayland, Massachusetts, Michael Kaplan wrote plays and musicals throughout high school and at Princeton University, where he attended college. Upon graduation he moved to New York where a number of his plays received productions and staged readings, primarily at The Ensemble Studio Theatre, where he is a member. For the past twenty-two years, he has lived in Los Angeles, working as a television writer and producer on a total of twelve different prime time shows for ABC, NBC, FOX, and UPN. His career as a comedy writer has included stints as a writer and Supervising Producer on two of television's most respected comedies, Roseanne and Frasier. For his work on the latter, he received an Emmy award, as a member of the producing staff, for best comedy series. He co-created and Executive Produced I'm In the Band for Disney XD. His new show, Dog With a Blog will be premiering on Disney Channel in the fall of 2012. He is the author of Betty Bunny Loves Chocolate Cake and Betty Bunny Wants Everything. He currently resides in Los Angeles with his wife and three children.Stephane Jorisch has illustrated numerous picture books, including New Year at the Pier, Granddad's Fishing Buddy, The Real Story of Stone Soup, and Jabberwocky, for which he won the prestigious Governor General's Award, the Canadian equivalent of the Caldecott. Mr. Jorisch lives with his wife and three children in Montreal, Canada.
Loading...
or
Not Currently Available for Direct Purchase