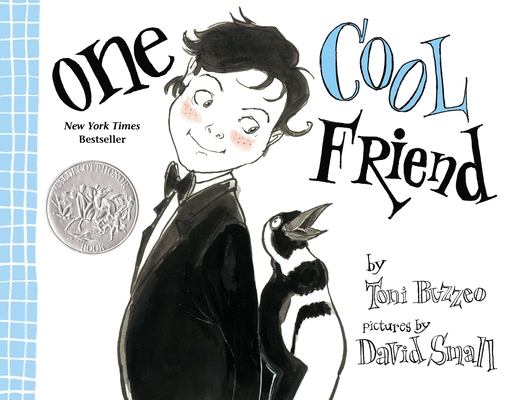 “Buzzeo's text and the illustrations by Caldecott Medal-winner Small are perfectly matched in this wonderful book. A pet penguin named Magellan makes excellent sense to Elliot, but what about his father? This 'cool' book delivers fun and so much more!”
— Jeanne Snyder, Books & Books, Coral Gables, FL
View the List

On a spontaneous visit to the aquarium, straight-laced and proper Elliot discovers his dream pet: a penguin. When he asks his father if he may have one (please and thank you), his father says yes. Elliot should have realized that Dad was probably thinking of a toy penguin, not a real one… Clever illustrations and a wild surprise ending make this sly, silly tale a kid-pleaser from start to finish.

Praise For One Cool Friend…

"The book’s humor is built on gentle misunderstandings between father and son (when Elliot asks for a penguin, his father assumes he means a stuffed one from the aquarium gift shop). . . A boy-and-his-pet story [that's] about as sweet as it gets." (Starred) — Publishers Weekly

“This charming picture book has many humorous details throughout, and kids will likely laugh out loud at the surprise (particularly for father!) ending.” — Booklist

“Suitable for both story time and closer observation, the illustrations (including the comical Magellan) complement the child-friendly premise and will certainly attract young readers to this quirky tale.” — Horn Book

“The comic characterizations of Elliott and his father, and Small’s lively ink, watercolor, and colored pencil illustrations […] will make this a popular choice for both reading aloud and reading alone.” — BCCB

“A happy tale of domestic amity, with a well-set-up punchline.” — Kirkus Reviews

Buzzeo was raised in Dearborn, Michigan and moved to Maine 23 years ago. She holds a Masters degree in English from the University of Michigan and a Masters degree in Library and Information Science from the University of Rhode Island. She has worked as a high school and college English teacher, a public children's librarian, and a school library media specialist. Currently, she is a Library Media Specialist at Longfellow School in Portland, Maine. Buzzeo was named the 1999 Maine Library Media Specialist of the Year. She lives in Buxton, Maine amid wild turkeys and black flies with her husband, Ken Cyll, her son, Chris Cyll, 19.

Her first book, The Sea Chest (Dial Books for Young Readers, September 2002) (ages 5-up), is set on a fictional midcoast Maine island and is based on the Maine Hendricks Head Light baby-in-the-sea chest legend. The book, illustrated in oils by Minnesota artist Mary GrandPré who has also illustrated the popular Harry Potter novels, is both Maine historical fiction and a touching adoption story. The title earned Buzzeo the 2000 Barbara Karlin Grant for Picture Book Writing from the Society of Children's Book Writers and Illustrators. It has been chosen as a Junior Library Guild selection and will be featured in Scholastic Book Fairs

Her second book, Dawdle Duckling (Dial Books for Young Readers, January 2003) (ages 2-6) is the story of a small duckling who swims to the beat of his own drummer--until danger threatens. The book, illustrated in pastels by California illustrator Margaret Spengler, is a cheerful reassuring tale of youthful rebellion and parental protection--with an exciting surprise ending.

David Small grew up in Detroit, studied Art and English at Wayne State University and completed his graduate studies in art at Yale. He went on to teach drawing and printmaking at the college level for fourteen years, during which time his first book Eulalie and The Hopping Head was published. David no longer teaches but has continued illustrating.

David has illustrated twenty-seven picture books, and has also provided the text for six of them. His Imogene’s Antlers has been featured for fifteen years on PBS’ “Reading Rainbow.” Fenwicks Suit presently is in production by Fox 2000 Four of David’s bestselling picture books were written by his wife, Sarah Stewart. Their book The Gardener was the recipient of 17 awards including the Christopher Medal and the 1998 Caldecott Honor Award.

Of his beginnings as an artist David has this to say: “Detroit is not where I would have lived given the choice as a child. Then, I would much rather have lived in Candy Land. But the fact is Detroit—a harsh, industrial—made art and music all the more sweet in my young life, more urgent and more of a necessity. Seen in that light, Detroit was the perfect place for me to grow up.”

David Small and Sarah Stewart make their home in Michigan in an 1833 Greek Revival house on ten acres of land along the banks of the St. Joseph River. Their house is on the National Register of Historic Places, and their property marks the northern boundary of the Great Tallgrass Prairie.