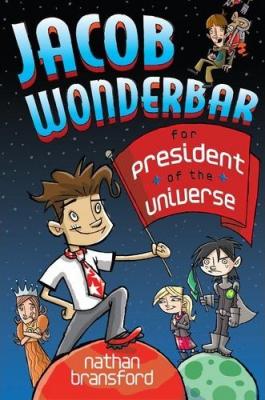 Jacob Wonderbar for President of the Universe (Hardcover)

When Jacob Wonderbar receives a message that he's been nominated for President of the Universe, he, Sarah Daisy, and Dexter immediately return to space. But Jacob's archnemesis, Prince Mick Cracken, is running as well, and his campaign tactics involve kidnappings and rogue space monkeys.

After surviving corndog-eating contests and insult debates, Jacob discovers the stakes for this election are even higher than he imagined: A military group wants to destroy Planet Earth, and the President of the Universe is the only person who can stop them. Hold on to your space helmet - Nathan Bransford's second book in the Jacob Wonderbar series is packed with planet-hopping adventure, hilarity, and heart.

Nathan Bransford (www.nathanbransford.com) is a social media director and writes a popular blog about writing and publishing. You can find him on Twitter (twitter.com/ NathanBransford)! He lives in San Francisco, California.

Praise For Jacob Wonderbar for President of the Universe…

"Bransford's second slapstick space saga is as much fun as the first."
-Kirkus

"The breakneck plot zooms from planet to planet and crisis to crisis, and includes berserk space monkeys, trigger-happy SEER thugs, and even bloviating journalists. Along the way, there's some trenchant parody of contemporary electoral politics and sensation-obsessed media, as well as a surprisingly thoughtful reflection on loyalty, friendship, and individual responsibility. The cliff-hanger ending will ensure an audience for the next installment."
-School Library Journal