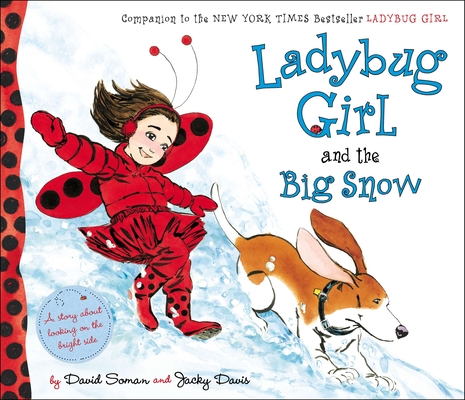 In this hardcover picture book from the New York Times bestselling Ladybug Girl  series, Ladybug Girl and Bingo need to look on the bright side of things to make their snow day adventure as much fun as it should be.

Lulu and her dog Bingo wake up to a snow-covered yard and decide to have the best snow day ever. They make penguin tracks and taste the frosting-like snow. But the snow is deep and cold, and when Lulu tries to build a fort or make a snowball, her mittens are too wet and snow falls down the back of her neck. This is not the day she planned. And then Lulu remembers that she is Ladybug Girl and Ladybug Girl can do anything! With another determined look at the snow, Ladybug Girl overcomes her frustration and sees the yard in a whole new light. She and Bingo are now ready to use their imaginations to create their own snow games, snow animals, and snow adventures!

For fans of The Snowy Day by Ezra Jack Keats, Ladybug Girl and the Big Snow honors the magic of the outdoors and creativity!

David Soman and Jacky Davis are the husband-and-wife creative team behind the New York Times bestselling LADYBUG GIRL books. They write the stories together and then David does the illustrations. All of the stories are based on their own children and family experiences, many of which take place right in their own backyard. Jacky Davis has worked in publishing and television. David Soman comes from a family of artists. He is an instructor at the School of Visual Arts in New York City. They live in Upstate New York with their two kids.

Praise For Ladybug Girl and the Big Snow…

Praise for Ladybug Girl and the Big Snow:

“The story incorporates creative, dramatic ideas into Lulu’s outdoor play that will appeal to young children’s imaginations. A fine choice for young readers on a cold winter night, especially when enjoyed with a cup of hot chocolate in front of a fire like the one Ladybug Girl, Bingo and her brother curl up in front of.”—Kirkus

“Highlight[s] the value of perseverance as setbacks threaten to dampen Lulu’s spirits (and clothing)…Should have fans watching the skies for first snowflakes.” —PW

“The characters leap from spread to spread, and the text has amazing exuberance. Crisp and clean watercolor and line illustrations feature numerous chucklesome aspects…. The images exemplify what the words need not explain–with just a little imagination the average snowflake can transform the familiar into a world full of wonder.”—School Library Journal