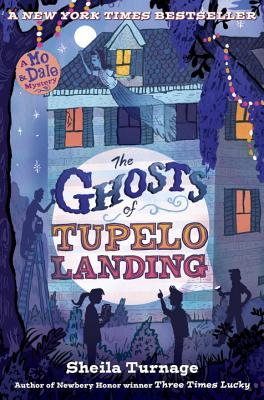 Small towns have rules. One is, you got to stay who you are -- no matter how many murders you solve.

When Miss Lana makes an Accidental Bid at the Tupelo auction and winds up the mortified owner of an old inn, she doesn't realize there's a ghost in the fine print. Naturally, Desperado Detective Agency (aka Mo and Dale) opens a paranormal division to solve the mystery of the ghost's identity. They've got to figure out who the ghost is so they can interview it for their history assignment (extra credit). But Mo and Dale start to realize that the Inn isn't the only haunted place in Tupelo Landing. People can also be haunted by their own past. As Mo and Dale handily track down the truth about the ghost (with some help from the new kid in town), they discover the truth about a great many other people, too.

Sheila Turnage grew up on a farm in eastern North Carolina. A graduate of East Carolina University, she authored two nonfiction books and one picture book before she started writing about Mo LoBeau and Dale. Three Times Lucky is a Newbery Honor book, a New York Times bestseller, an Edgar Award Finalist, an E. B. White Read-Aloud Honor book, and was included on seven Best Book of the Year lists. The Ghosts of Tupelo Landing, the follow-up to Three Times Lucky, has so far garnered five starred reviews. Today Sheila lives on a farm with her husband, a smart dog, a dozen chickens, and a flock of guineas.
Loading...
or
Not Currently Available for Direct Purchase