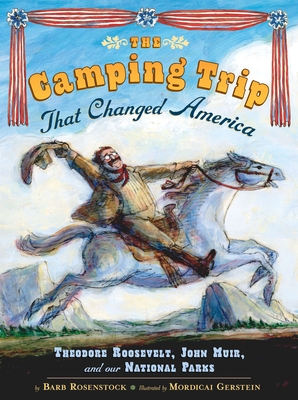 The Camping Trip that Changed America

Caldecott medalist Mordicai Gerstein captures the majestic redwoods of Yosemite in this little-known but important story from our nation's history. In 1903, President Theodore Roosevelt joined naturalist John Muir on a trip to Yosemite. Camping by themselves in the uncharted woods, the two men saw sights and held discussions that would ultimately lead to the establishment of our National Parks.

Praise For The Camping Trip that Changed America: Theodore Roosevelt, John Muir, and Our National Parks…

Now a Bank Street 2013 Best Book of the Year and a Parents' Choice Silver Medalist!

Booklist Top Ten Books on the Environment for Youth

Barb Rosenstock (www.barbrosenstock.com) lives with her husband and their children in Vernon Hills, Illinois.

Mordicai Gerstein (www.mordicaigerstein.com) is the author and/or illustrator of numerous books for children, including The Man Who Walked Between the Towers, which was awarded the Caldecott Medal in 2004. He lives in western Massachusetts with his wife and their daughter, Risa.
Loading...
or support indie stores by buying on