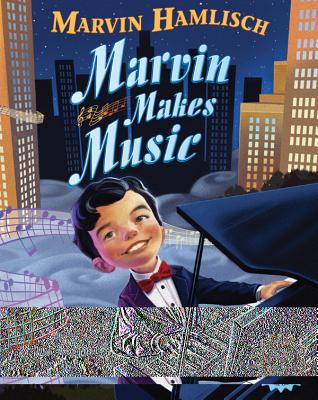 A true story from one of America's most beloved composers

Marvin loves to play the piano and compose his own songs. But performing music over and over that's composed by some old guys name Ludwig and Wolfgang just gives him knots in his stomach. When his father tells Marvin he has an audition with the most prestigious music school, how can Marvin overcome his nerves and get swept away by the music?

This endearing book is based on the true life story of composer Marvin Hamlisch, who, at the age of six, was the youngest person ever accepted into the Juilliard School.

Marvin Hamlisch is the Emmy, Grammy, Oscar, Tony, and Pulitzer-winning composer of the scores for Broadway's A Chorus Line and over 40 films, including The Way We Were. He lives in New York City.

Jim Madsen has been illustrating for more than 20 years. He makes his home in Provo, Utah, with his wife and three children.
or
Not Currently Available for Direct Purchase
Copyright © 2020 American Booksellers Association