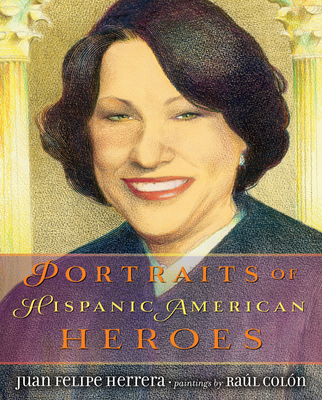 This visually stunning book showcases twenty Hispanic and Latino American men and women who have made outstanding contributions to the arts, politics, science, humanitarianism, and athletics.  Gorgeous portraits complement sparkling biographies of Cesar Chavez, Sonia Sotomayor, Ellen Ochoa, Roberto Clemente, and many more. Complete with timelines and famous quotes, this tome is a magnificent homage to those who have shaped our nation.

"This visually and textually stunning title is one to cherish and celebrate." –SLJ, starred review

Juan Felipe Herrera, the son of migrant farmworkers, grew up to become a prominent Mexican-American poet. He is currently the California Poet Laureate and will serve as the U.S. Poet Laureate for 2015-2016.  The award-winning author of many books of poetry, he is also an actor, a musician, and a popular professor at the University of California, Riverside. He lives in Redlands, California.

Raúl Colón is the award-winning illustrator of many books for children. He has won the Golden Kite award, the New York Times Best Illustrated award, Silver and Gold Medals from the Society of Illustrators, and ALA Notable honors, as well as critical acclaim from reviewers. He lives in New City, New York.
Loading...
or support indie stores by buying on