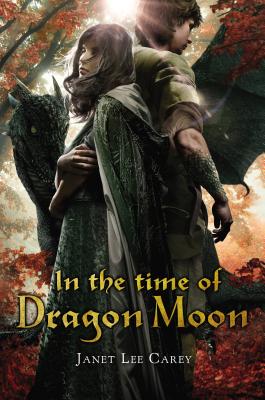 In the Time of Dragon Moon

A rich medieval fantasy novel from an author whose work has been called “TRULY ORIGINAL . . . FANTASY AT ITS BEST.”

A perfectly crafted combination of medieval history, mythology, and fantasy, set on Wilde Island, featuring  Uma Quarteney--a half Euit and half English girl, who has never been fully accepted by her Euit tribe--and Jackrun Pendragon--a fiery dragonrider with dragon, fairy, and human blood.

On the southernmost tip of Wilde Island--far from the Dragonswood sanctuary and the Pendragon Castle--live the native Euit people. Uma wants to become a healer like her Euit father. But the mad English queen in the north, desperate for another child, kidnaps Uma and her father and demands that he cure her barrenness. After her father dies, Uma must ensure that the queen is with child by the time of the Dragon Moon, or be burned at the stake.

Terrified and alone, Uma reaches out to her only possible ally: the king's nephew Jackrun, a fiery dragonrider with dragon, fairy, and human blood. Together, they must navigate through a sea of untold secrets, unveil a dark plot spawned long ago in Dragonswood, and find a way to accept all the elements--Euit, English, dragon, and fairy--that make them who they are.

Praise For In the Time of Dragon Moon…

"The author's world-building is detailed and fascinating, and Uma is a strong, admirable heroine. This is a must-purchase for libraries owning the earlier installments and a great choice for where teen fantasy is popular."—School Library Journal

"A story of courage and romance that readers will not soon forget. While Uma's struggle to help the queen and save her people is intriguing, the depth of her character reaches much further, exploring issues of race, gender, and identity....The text will be a sure favorite of fans of high fantasy."—VOYA

"A satisfying tale of a girl who must come to terms with her own blended identity."—Kirkus

"While the story has roots in traditional fairy tales and legends, the author has crafted something new and magical."—School Library Journal, starred review for Dragon's Keep

Janet Lee Carey was born in New York and grew up in California. She is the award-winning author of several young adult novels, most notably her epic fantasy novels set on Wilde Island--Dragon's Keep, Dragonswood, and the upcoming In the Time of Dragon Moon. Janet lives near Seattle with her family where she writes and teaches writing workshops.
Loading...
or
Not Currently Available for Direct Purchase