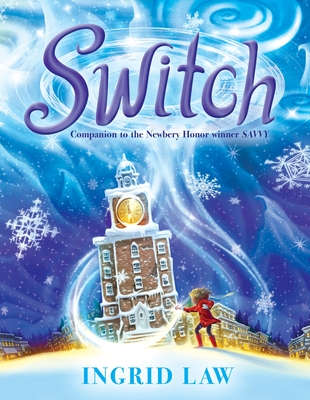 Gypsy Beaumont has always been a whirly-twirly free spirit, so as her thirteenth birthday approaches, she hopes to get a magical ability that will let her fly, or dance up to the stars. Instead, she wakes up on her birthday with blurry vision . . . and starts seeing flashes of the future and past. But when Momma and Poppa announce that her very un-magical, downright mean Grandma Pat has Alzheimer’s and is going to move in with them, Gypsy’s savvy—along with her family’s—suddenly becomes its opposite. Now it’s savvy mayhem as Gypsy starts freezing time, and no one could have predicted what would happen on their trip to bring Grandma Pat home  . . . not even Gypsy.

With her trademark style and whimsical, beautiful language, Ingrid Law has written another wonderfully moving companion to her Newbery Honor winning Savvy.

"Law has again told a story with as much heart as creativity." –SLJ

"Readers will be caught up in this snowy, magical adventure." –Booklist

"Fans of Savvy and Scumble will love this book. It is a great classroom read-aloud for upper grade levels."–SLC

Ingrid Law is the New York Times bestselling author of two novels for young readers, Savvy and Scumble. Ingrid's books have been placed on more than 30 state reading lists, and have earned accolades from Publishers Weekly, Oprah's reading list, the Today Show's Al Roker's Book Club for Kids, and the Smithsonian. Savvy was named a Newbery Honor book in 2009. She lives in Lafayette, Colorado.
Loading...
or support indie stores by buying on
(This book is on backorder)