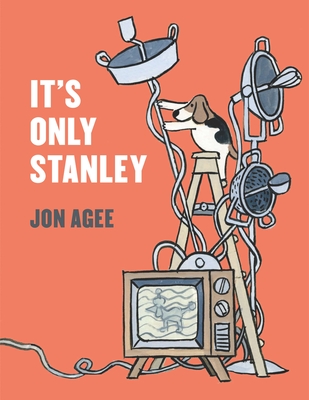 But what Stanley the dog is actually doing while his oblivious family goes back to bed is deliciously absurd: he's turning the house into a rocket ship to zoom himself and his family to another planet for an alien encounter. This is a perfect rhyming read-aloud for fans of irreverent tales like Click Clack Moo and I Want My Hat Back.

Praise For It's Only Stanley…

Praise for It's Only Stanley

"[A] superbly absurd tale . . . The rhyming text is natural and paced for surprise. And the droll watercolors handle facial expressions well from aggravation to awe to admiraton."—The San Francisco Chronicle

* "Agee and his simple, droll watercolors return with a work that manages to be absurdist, alarming, and—just when you least expect it—poignant. . . . Very strange, and very, very wonderful."—Booklist, starred review

* "Agee appeals to connoisseurs of the absurd, and he shapes ridiculous developments into a tightly composed and satisfying picture book."—Publishers Weekly, starred review

Jon Agee is the beloved author and illustrator of many acclaimed picture books, including Terrific (a New York Times Best Illustrated Book), Milo’s Hat Trick (an ALA Notable Book), and the recent Little Santa, an ALA Notable Book and recipient of five starred reviews. He lives in San Francisco, California.
Loading...
or support indie stores by buying on