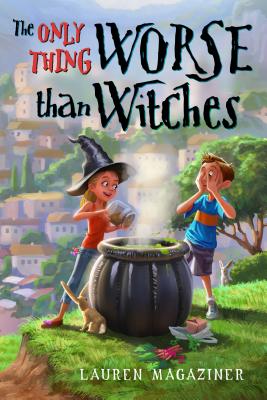 The Only Thing Worse Than Witches

Rupert Campbell is fascinated by the witches who live nearby. He dreams of broomstick tours and souvenir potions, but Rupert’s mother forbids him from even looking at that part of town. The closest he can get to a witchy experience is sitting in class with his awful teacher Mrs. Frabbleknacker, who smells like bellybutton lint and forbids Rupert’s classmates from talking to each other before, during, and after class. So when he sees an ad to become a witch’s apprentice, Rupert simply can’t resist applying.

But Witchling Two isn’t exactly what Rupert expected. With a hankering for lollipops and the magical aptitude of a toad, she needs all the help she can get to pass her exams and become a full-fledged witch. She’s determined to help Rupert stand up to dreadful Mrs. Frabbleknacker too, but the witchling's magic will be as useful as a clump of seaweed unless Rupert can figure out a way to help her improve her spellcasting—and fast!

Praise For The Only Thing Worse Than Witches…

*"Fifth-grader Rupert Campbell lives in a world that combines Roald Dahl’s Witches and Louis Sachar’s Wayside School....readers will banish themselves from the ordinary world to finish this book in a flash." - Kirkus Reviews, starred review

"Magaziner’s debut has echoes of Dahl’s Matilda...The same goofy charm that Magaziner brings to the names of characters and settings (Mrs. Gummyum, Yammerstop Way) carries through to the details of witch life and logic in the town of Gliverstoll, resulting in a fun, frothy story that will, well, charm its readers." - Publishers Weekly

"Mrs. Frabbleknacker is as awful as her name, with antics reminiscent of scenes from Louis Sachar’s Sideways Stories from Wayside School gone wrong." - School Library Journal

"Ideal for middle-grade readers who love Roald Dahl’s Matilda (1988) and enjoy humor with their fantasy, this debut novel is madcap and fantastical. It’s the perfect thing for kids not quite ready for Diane Duane or Madeleine L’Engle." - Booklist

"This hilarious, light-hearted debut would be a great read-aloud for middle grade classrooms." - Library Media Connection

Lauren Magaziner recently graduated from Hamilton College. She lives in Brooklyn, New York. The Only Thing Worse Than Witches is her first book.
Loading...
or
Not Currently Available for Direct Purchase