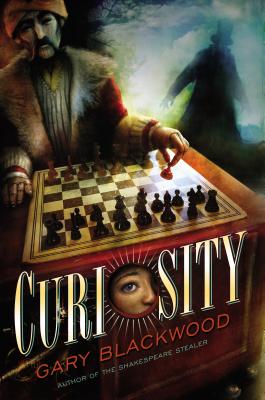 Intrigue, danger, chess, and a real-life hoax combine in this historical novel from the author of "The Shakespeare Stealer"
Philadelphia, PA, 1835. Rufus, a twelve-year-old chess prodigy, is recruited by a shady showman named Maelzel to secretly operate a mechanical chess player called the Turk. The Turk wows ticket-paying audience members and players, who do not realize that Rufus, the true chess master, is hidden inside the contraption. But Rufus's job working the automaton must be kept secret, and he fears he may never be able to escape his unscrupulous master. And what has happened to the previous operators of the Turk, who seem to disappear as soon as Maelzel no longer needs them? Creeping suspense, plenty of mystery, and cameos from Edgar Allan Poe and P. T. Barnum mark Gary Blackwood's triumphant return to middle grade fiction.

Gary Blackwood is a playwright and the bestselling author of The Shakespeare Stealer series. He lives in Nova Scotia.

* "A thrilling look at the 19th-century age of automata—“a time of curiosity-seekers”—and the riveting story of a likable Philadelphia boy whose life of the mind helps him transcend his extraordinary, oft-cruel circumstances." - Kirkus Reviews, starred review

"The layered narrative should appeal to history buffs, gadget lovers, and fans of The Invention of Hugo Cabret." - Publishers Weekly

"Blackwood excels in writing historical fiction that is as informative as it is entertaining. The period details, including cameos by famous people, bring the era to life, but it’s the vivid characters and the inventive plot, told through Rufus’s sympathetic first-person narrative, that drive our interest in the story." - The Horn Book

"With a cast of fictional and historical figures including grand showman P. T. Barnum; Edgar Allan Poe and his teenage wife, Virginia; and the real-life owner of the Turk, Maelzel—this Dickensian coming-of-age story from the author of Around the World in 100 Days offers a glimpse into quaint corner of American history." - Booklist

Gary Blackwood's The Shakespeare Stealer was the winner of the Mark Twain Award. It was also an ALA Best Book for Young Adults, an ALA Notable Children’s Book, a Golden Kite Award Shortlist Book, a CCBBC Choice, and one of the Best Children’s Books for ages 12 and up as chosen by Bank Street College.