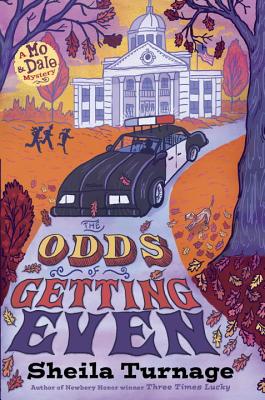 The Odds of Getting Even (Mo & Dale Mysteries)

The trial of the century has come to Tupelo Landing, NC. Mo and Dale, aka Desperado Detectives, head to court as star witnesses against Dale's daddy--confessed kidnapper Macon Johnson. Dale's nerves are jangled, but Mo, who doesn't mind getting even with Mr. Macon for hurting her loved ones, looks forward to a slam dunk conviction--if everything goes as expected.
Of course nothing goes as expected. Macon Johnson sees to that. In no time flat, Macon's on the run, Tupelo Landing's in lockdown, and Dale's brother's life hangs in the balance. With Harm Crenshaw, newly appointed intern, Desperado Detectives are on the case. But it means they have to take on a tough client--one they'd never want in a million years.

For everyone who's already fallen for Mo and Dale, and for anyone who's new to Tupelo Landing, The Odds of Getting Even is a heartwarming story that perfectly blends mystery and action with more serious themes about family and fathers, all without ever losing its sense of humor.

Praise For The Odds of Getting Even (Mo & Dale Mysteries)…

“With her mix of homespun humor, well-plotted mystery, and delicious characterization . . . Turnage's tale is full of heart.”—Kirkus, starred review

“Another rewarding adventure . . . narrated by Mo in her distinctive, imaginative voice. The writing lulls you with laughter, then occasionally blindsides you with unexpected tenderness.”—Booklist, starred review

"Well crafted, with fast pacing; readers will gallop through the nonstop action to a satisfying conclusion. A must-read for fans of the first two volumes, and a rewarding adventure all on its own."—School Library Journal

"Turnage's rich voice, abundance of heart, and wicked sense of humor handle the dynamics of the town with verve…One can only hope that this is not the end of this clever, sweet, laugh-out-loud funny series."—VOYA

"When Dale’s father, Macon, is accused of breaking out of jail. . .Does Mo. . .follow her gut and hunt down Macon, or does she relinquish power to Dale and support his conviction that his father is innocent? Friendship prevails in this fine novel, with a number of unobtrusive acts of kindness flourishing throughout. There’s a complexity to the characters, from mean-as-a-snake Macon to drop-dead-handsome Lavender, all carefully developed throughout the series, creating a terrific read."—Horn Book

"A rousing tale of action, adventure, and intrigue....So sit back and enjoy a well-told yarn that is sure to please readers of all ages."—SLC

Sheila Turnage grew up on a farm in eastern North Carolina. A graduate of East Carolina University, she authored two nonfiction books and one picture book before she started writing about Mo LoBeau and Dale. Three Times Lucky is a Newbery Honor book, a New York Times bestseller, an Edgar Award Finalist, an E. B. White Read-Aloud Honor book, and was included on seven Best Book of the Year lists. The Ghosts of Tupelo Landing, the follow-up to Three Times Lucky, is also a New York Times bestseller and has so far garnered five starred reviews. Today Sheila lives on a farm with her husband, a dozen chickens, and a flock of guineas.
Loading...
or support indie stores by buying on
(This book is on backorder)