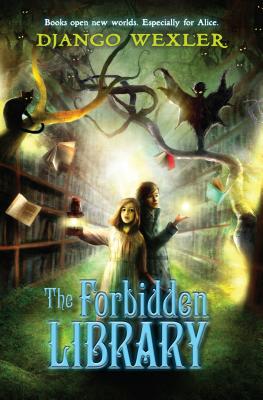 The Forbidden Library kicks off an action-packed fantasy series with classic appeal, a resourceful heroine, a host of magical creatures, and no shortage of narrow escapes--perfect for fans of Story Thieves, Coraline, Inkheart, and Harry Potter Alice always thought fairy tales had happy endings. That--along with everything else--changed the day she met her first fairy When Alice's father goes down in a shipwreck, she is sent to live with her uncle Geryon--an uncle she's never heard of and knows nothing about. He lives in an enormous manor with a massive library that is off-limits to Alice. But then she meets a talking cat. And even for a rule-follower, when a talking cat sneaks you into a forbidden library and introduces you to an arrogant boy who dares you to open a book, it's hard to resist. Especially if you're a reader to begin with. Soon Alice finds herself INSIDE the book, and the only way out is to defeat the creature imprisoned within. It seems her uncle is more than he says he is. But then so is Alice.

Praise For The Forbidden Library…

"Working in the grand tradition of children's fantasy, Wexler's off to a promising start."
-Kirkus Reviews

"Fans of Harry Potter and Cornelia Funke's Inkheart (2003) will relish that the library houses magical books . . . It's a joy to watch the dutiful Alice develop her innate curiosity and become a proactive, resourceful heroine, matching wits with snarky cats, dangerous beasts, and a certain smug boy. This is a charming, adventuresome fantasy from a promising new author."
-Booklist

Django Wexler is the author of The Thousand Names. He lives near Seattle, Washington.
Loading...
or
Not Currently Available for Direct Purchase