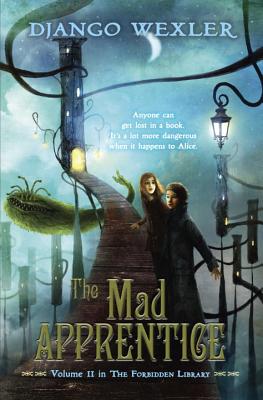 The dark and thrilling sequel to the book Kirkus called, "Harry Potter, Alice in Wonderland, and Inkheart all rolled into one"

When Alice's mysterious Uncle Geryon sends her to help capture a rogue apprentice--a boy who has the same ability Alice has to Read himself into stories--she knows to expect a wild and unpredictable trip. But even though Alice has visited the magical realms inside libraries before, this adventure is far more dangerous. Because Torment, the magic creature holding this library together, has gone mad.

But he might also have information about Alice's missing father.

Praise For The Mad Apprentice: The Forbidden Library: Volume 2…

"Wexler is an able builder of magical worlds and creatures, with labyrinths, an enchanted library, and a feisty, swashbuckling heroine at the center. A story rich in action and allegory—fantasy fans will want to hang on for what comes next."—Kirkus

Praise for The Forbidden Library:
"Working in the grand tradition of children's fantasy, Wexler's off to a promising start."—Kirkus

Django Wexler is the author of The Forbidden Library, as well as the adult fantasy series, The Shadow Campaigns. He lives near Seattle, Washington.
Loading...
or
Not Currently Available for Direct Purchase