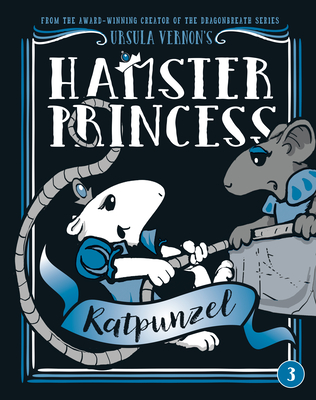 Princess Harriet Hamsterbone does not like sitting around at home. How’s a princess supposed to have any fun when her parents are constantly reminding her to be careful and act princessly? So when her pal Prince Wilbur needs help finding a stolen hydra egg, Harriet happily takes up the quest.  The thief’s trail leads them to a wicked witch and a tall tower, occupied by a rat whose tail has more to it than meets the eye!

The third book in the award-winning comic hybrid Hamster Princess series will make you look at rodents, royalty, and fairy tales in a whole new light.

"Packed with wit that’s broad enough to appeal to children yet clever enough to win over adults...Hand this can’t-miss installment to followers of the series, fans of comedy mixed with adventure, and those seeking an alternative to traditional princess stories." —School Library Journal

"Harriet is as delightful as ever.... As long as Vernon keeps Harriet’s adventures coming, fans new and old are boundto keep reading them." — Booklist

"Vernon pokes gentle fun at all of her characters—especially lovable Harriet—and offers a humorous feminist critique of the princess genre." —Kirkus Reviews

Ursula Vernon is a full-time author and illustrator and creator of the Dragonbreath series. Her work has won a Hugo Award and been nominated for an Eisner. She loves birding, gardening, and spunky heroines. She dislikes anything sparkly and thinks she would make a terrible princess.
Loading...
or support indie stores by buying on