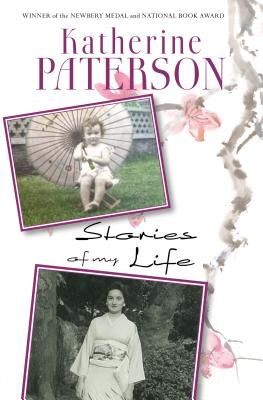 From her childhood in China to the moment she won her first National Book Award, literary icon Katherine Paterson shares the personal stories that inspired her children’s books.
Told with her trademark humor and heart, Paterson's tales reveal details about her life from her childhood with missionary parents, to living as a single woman in Japan, to raising four children in suburban Maryland with her minister husband. Read about the origins of such familiar characters as Leslie Burke and Janice Avery from Bridge to Terabithia, and go behind the scenes to the moments Katherine found out she won her many awards. Filled with personal photos and letters, this funny, heartwarming history from a legendary writer lets fans in on the making of literary classics.

Praise For Stories of My Life…

* "Despite the accolades, her voice is chatty and engaged, with not a hint of literary hauteur. Paterson's legions of fans, young and old, will welcome this peek into her life and process." - Kirkus Reviews, starred review

* "What absolutely shines through is Paterson’s warm, self-effacing humor, and the extraordinary humility of a writer who has won two National Book Awards, two Newbery Medals, and the Hans Christian Andersen Medal. Like Mark Twain, to whom she is distantly related, Paterson is a true American treasure." —Publishers Weekly, starred review

* "Paterson's legions of fans, young and old, will welcome this peek into her life and process." —Kirkus Reviews, starred review

"This set of personal tales offers the same openness and vibrant detail that helped Paterson garner Newbery Medals and National Book Awards...For those of us never invited to dinner in Paterson’s undoubtedly welcoming home, this book allows us at least to imagine the stories we might hear while doing the dishes." — School Library Journal

“A highly recommended read for Paterson fans, or anyone who delights in children’s literature.” —BookPage

"[Paterson's] sense of humor and her adventurous spirit shining through the narrative."  —VOYA

"Readers will gain an understanding not only of the author herself, but also where her books and characters originated." — LMC

Katherine Paterson is a legendary children's books author whose work has garnered many awards, including two Newbery medals, two National Book Awards, and the Laura Ingalls Wilder medal for her substantial and lasting contribution to literature for children. She served as the National Ambassador for Young People’s Literature for 2010-2011 and is currently vice president of the National Children's Book and Literacy Alliance. She lives in Barre, Vermont.