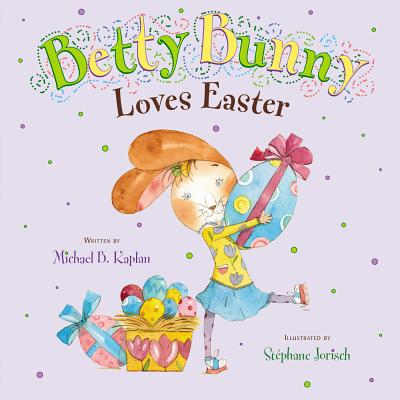 Nobunny does an Easter egg hunt quite like Betty Bunny! For fans of Ladybug Girl and Fancy Nancy, check out the loveable handful from the creator of Disney’s T.V. series Dog with a Blog.

Yes, Betty Bunny loves Easter. She loves it so much that she just knows when she grows up, she will be the Easter Bunny. So it comes as quite a shock when she learns that her brothers and sister have been helping her in the egg hunt every year. Determined to find eggs on her own, this time, Betty Bunny also finds out a thing or two about the satisfaction of accomplishment.

Going it alone, Betty Bunny strikes again in the latest in her series, a funny Easter tale of independence.

"A tight-knit modern family, exchanging gentle chides and knowing, sidelong glances . . . in this sweetly snarky addition to the series."—Publishers Weekly

"Through hard work and resilience, the young rabbit grows a little more independent and discovers that achievement through autonomy can be rewarding. . . . Here the theme of independence is prominent without ever becoming didactic. . . . A definite hit during Easter season."—School Library Journal

"A refreshing contrast to more saccharine [Easter] holiday titles. Youngsters suffering from the gap between "I want to do it myself" and the desire for results will empathize with Betty's dilemma."—BCCB

Michael Kaplan is an Emmy award-winning television writer and producer and his career as a comedy writer included stints on two of television's most respected comedies, Roseanne and Frasier. He co-created and Executive Produced I'm In the Band for Disney XD. He is the creator of show, Dog With a Blog on Disney Channel. He currently resides in Los Angeles with his wife and three children.Stephane Jorisch has illustrated numerous picture books, including Jabberwocky, for which he won the prestigious Governor General's Award. He was also nominated for the Hans Christian Anderson Award. Mr. Jorisch lives with his wife and three children in Montreal, Canada.
Loading...
or support indie stores by buying on