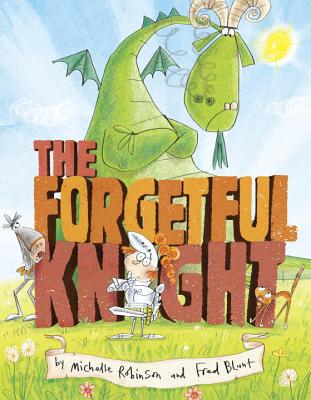 This hilarious, Monty Python–style sendup of the classic knight-and-dragon story comes with jaunty rhymes and a fabulous twist ending

Mischief! Mishaps! Dragons! Here's the story of an intrepid knight, only our narrator can't quite remember the details. Did that knight carry a sandwich, or a sword? Was he supposed to fight a cat, or a dragon? A hilarious and unpredictable adventure ensues, building through laugh-out-loud rhymes until, at last, the narrator remembers his own role at the center of all the marvelous madness. Fans of Jon Scieszka's The Stinky Cheese Man, David Ezra Stein's Interrupting Chicken, all of Patrick McDonnell's and Mac Barnett's picture books will love this zany read-aloud adventure.

One of Michelle Robinson's first jobs was writing radio ads. She wrote more than 6,000 before she got bored and moved on to writing stories for children. She now lives in Frome, England with her two children.

Fred Blunt never wanted to be an astronaut or drive a train when he grew up. Right from the beginning, he knew he wanted to draw silly pictures for a living. Fred worked on all sorts of projects from advertising to animation, including designing an animated series of interstitials for the BBC. He now works mostly on children's books. He lives in Swindon, Wiltshire, UK, with his wife and two young children.

Praise For The Forgetful Knight…

Praise for The Forgetful Knight

“Clever and catchy . . . Kids will love this quirky quest and its uproariously unreliable narrator.” —Kirkus Reviews

“Lots of humorous action and details for kids to pore over. . . Should produce plenty of giggles both in storytime or when shared one-on-one.”—School Library Journal

“It never hurts when a picture book rhymes AND is funny.” —Betsy Bird for A Fuse #8 Production, SLJ.com

“Told in rhyme with a jaunty rhythm, loads of punch lines and questions that prompt kids to put their two cents into the story, The Forgetful Knight is a wonderfully executed tale of imagination and big, big fun. . . . Don’t zip through the book; take time for kids to peruse the hilarious, detailed illustrations.”—Books to Borrow, Books to Buy

“This is a fantastic little book period, end of story . . . The Forgetful Knight teaches children about manners, friendship, negotiation, compromise, and compassion without being so obvious as to make one want to vomit profusely of preachiness. Also, butts get set on fire and butts are always funny–don’t pretend they’re not. . . . I can pretty much guarantee every kid in your life will enjoy it and it is definitely going into my gift-giving arsenal for the future.” —GeekMom.com
or
Not Currently Available for Direct Purchase
Copyright © 2020 American Booksellers Association