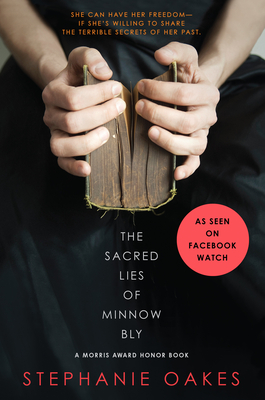 The Sacred Lies of Minnow Bly

A hard-hitting and hopeful story about the dangers of blind faith—and the power of having faith in yourself.

The Kevinian cult has taken everything from seventeen-year-old Minnow: twelve years of her life, her family, her ability to trust. And when she rebelled, they took away her hands, too.

Now their Prophet has been murdered and their camp set aflame, and it's clear that Minnow knows something—but she's not talking. As she languishes in juvenile detention, she struggles to un-learn everything she has been taught to believe, adjusting to a life behind bars and recounting the events that led up to her incarceration. But when an FBI detective approaches her about making a deal, Minnow sees she can have the freedom she always dreamed of—if she’s willing to part with the terrible secrets of her past.

Gorgeously written, breathlessly page-turning and sprinkled with moments of unexpected humor, this harrowing debut is perfect for readers of Emily Murdoch's If You Find Me and Nova Ren Suma's The Walls Around Us, as well as for fans of Orange is the New Black.

Praise For The Sacred Lies of Minnow Bly…

* "In beautiful and harrowing prose, Stephanie Oakes’ debut peels back the veneer of fairytales to reveal their inherent darkness."—Booklist, STARRED REVIEW

"The Scared Lies of Minnow Bly is a psychological thriller, a commentary on our justice system, and a must read book."—Hypable

"A page-turner in the truest form of the phrase."—Bustle

"The unravelling of the mystery and the timing of the revelations is masterful, culminating in an explosively rewarding ending. Unflinching, unrelenting and visceral, this one has undeniable adult crossover appeal."—The Globe and Mail

"Based on Grimm’s fairy tale, “The Handless Maiden,” the powerful, fluent writing; engrossing and well-layered mystery; compelling characters; and provocative ideas about family, faith, honesty, loyalty, and friendship are engaging....Ellen Hopkins devotees and fans of The Chosen One by Carol Lynch Williams will seek this one out."—School Library Journal

Stephanie Oakes lives in Spokane, Washington, and works as a library media teacher in a combined middle and elementary school. She has an MFA in poetry from Eastern Washington University. The Sacred Lies of Minnow Bly is her debut novel.
Loading...
or
Not Currently Available for Direct Purchase