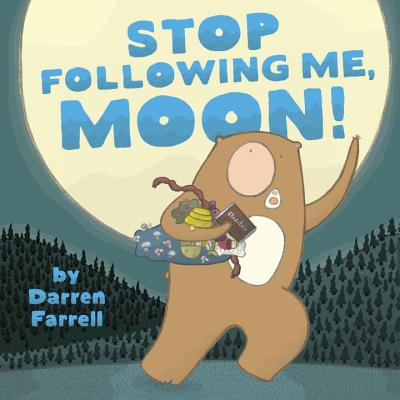 Bear is hungry. So hungry that when he spies a squirrel's berry snack, he can't help taking the whole berry bush. Then, when he wanders past a busy beehive, Bear knows he's hit the jackpot. But someone is on to him—the moon! Or so Bear thinks. Before he knows it, Bear is on the run with his stolen snacks, causing a whole lot of trouble for the other animals in the forest.

With big laughs, silly surprises, and a read-aloud-ready refrain, this picture book is perfect for fans of Jon Klassen and Mo Willems.

Praise For Stop Following Me, Moon!…

*"Whether as an offbeat bedtime story or simply an entertaining tale about a goofy bear, there’s great imagination-seizing potential here." —BCCB, starred review

“When the moon seems to follow you, it can be a perfect introduction to the new wonders of the universe. Or it can be, as in this larky book from Farrell, a great opportunity to goof on someone’s naïveté.” — The New York Times Book Review

"Generosity wins out over greed in this goofy moonlit morality tale." —The Wall Street Journal

"Not only will Bear make readers laugh out loud, but he illustrates how sharing can build a community. Bear's hilarious adventure begs for multiple readings." —Kirkus Reviews

"The great expressions and action sequences are perfect. And while Bear is the star of the show, eagle-eyed readers will see some hilarious background scenes...An amusing read about taking and giving back that is sure to give kids the giggles." —School Library Journal

Darren Farrell is the author-illustrator of Thank You, Octopus, which received a starred review from Kirkus Reviews, was an NPR Great Reads List Staff Pick, and was a Huffington Post Best Picture Books of 2014 honorable mention. Darren lives, for the time being, with his family in Seoul, South Korea, where he always makes sure there are no monsters under his son's bed.
Loading...
or
Not Currently Available for Direct Purchase