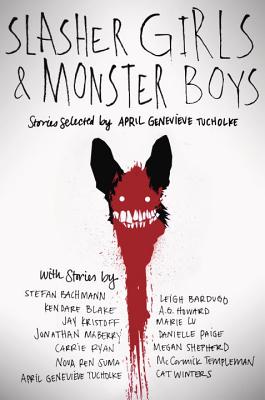 For fans of Stephen King, Neil Gaiman, American Horror Story and The Walking Dead comes a powerhouse anthology featuring some of the best thriller and horror writers in YA

A host of the sharpest young adult authors come together in this collection of terrifying tales and psychological thrillers. Each author draws from a mix of literature, film, television, and music to create something new and fresh and unsettling. Clever readers will love teasing out the references and can satisfy their curiosity at the end of each tale, where the inspiration is revealed. There are no superficial scares here; these are stories that will make you think even as they keep you on the edge of your seat. From blood horror, to the supernatural, to unsettling, all-too-possible realism, this collection has something for anyone looking for an absolute thrill.

"If your idea of an excellent summer night is telling ghost stories around the campfire, you'll be jumping for (horrific) joy over Slasher Girls & Monster Boys."—Bustle

“Terrifying and new . . . There’s nary a clunker in the collection—this is satisfying, disturbing horror for the modern YA audience.” —Publishers Weekly

"This killer collection will satisfy any thriller junkie."—Booklist Online

"Satisfyingly diverse and compelling. . . . The majority of the protagonists are female [but] not one is a helpless victim. Many contributors subvert and complicate the roles of protagonist and antagonist, keeping readers on their toes . . . After encountering the horrors here, variously supernatural and disturbingly human, readers may want to leave the lights on.—The Horn Book

“Will scare, thrill, and terrify."—VOYA

“A ton of terrifying mini thrillers that take inspiration from classic stories. There’s a bit of supernatural in here, some gore-filled-horror, terrifying creatures . . . something for everybody.”—Book Riot

April Tucholke's Between the Devil and the Deep Blue Sea:
"Deliciously creepy."—TheAtlanticWire.com
* “A stunning debut with complex characters, an atmospheric setting, and a distinct voice . . . Tucholke has real talent.”—VOYA, starred review

Stefan Bachmann's The Peculiar:
“Richly realized . . . accomplished . . . This is a story young fantasy buffs are sure to enjoy.”—New York Times Book Review

Leigh Bardugo's Shadow and Bone:
“Mesmerizing . . . Bardugo’s set up is shiver-inducing, of the delicious variety. This is what fantasy is for.”—New York Times

Kendare Blake's Anna Dressed in Blood:
* "Abundantly original, marvelously inventive and enormous fun, this can stand alongside the best horror fiction out there. We demand sequels."—Kirkus, starred review

Marie Lu's The Young Elites:
* “Lu pivots from the ‘coming of age via romance’ formula to pry apart the many emotions that pass under the rubric of love . . . there are no safe places where the pressures of betrayal, death threats, and rejection aren’t felt.”—Publishers Weekly, starred review
* “Readers should prepare to be captivated.”—Booklist, starred review
* “A must for fans of . . . totally immersive fantasies.”—Kirkus, starred review

Cat Winters's In the Shadow of Blackbirds:
* "A story of the breaking point between sanity and madness, delivered in a straightforward and welcoming teen voice."—Booklist, starred review

April Genevieve Tucholke is the author of Between the Devil and the Deep Blue Sea and Between the Spark and the Burn. She lives in Oregon.
Loading...
or
Not Currently Available for Direct Purchase