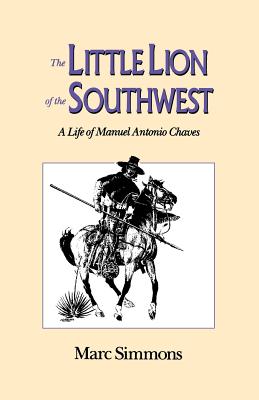 The Little Lion of the Southwest

A Life Of Manuel Antonio Chaves

Manuel Antonio Chaves’ life straddled three eras of New Mexican history: he was born (1818) at the tag end of the Spanish colonial period, he grew to manhood in the rough and heady days of the Santa Fe trade during the quarter century of Mexican rule (1821–1846), and he spent his mature years under the territorial regime established by the United States. Manuel Chaves’ long career (died 1889) was interwoven with almost every major historical event which occurred during his adult life—the Texan-Santa Fe Expedition, the Mexican War, the Civil War, skirmishes with Utes, Navajos, and Apaches. He was called El Leoncito, The Little Lion, having earned the name as an Indian fighter. He lived for two years in St. Louis and was a well-travelled man, doing business in New Orleans, New York, and Cuba.

A hundred years ago when men still gathered around campfires and storytelling was a well-developed art, Chaves’ exploits were known to all New Mexicans. But history has a capricious memory and his name became virtually forgotten. Around the turn of the century, Charles F. Lummis’ flowery pen recalled brief attention to Chaves’ life, and in 1927 he appeared as a minor character in Willa Cather’s Death Comes for the Archbishop—but otherwise was virtually forgotten. Alas. Too few of our Spanish frontiersmen have been studied in depth. Manuel Chaves and his life should not be lost. He was one of the legendary but real men who pioneered and built the 19th century Southwest. Howard R. Lamar laments: “The Spanish-American population of New Mexico still lacks a historian.” Marc Simmons’ biography of Manuel Chaves helps fill that gap.

Marc Simmons was called by another writer “one remarkable caballero.” He certainly is. He has been a Wyoming ranch hand, a movie extra with Warner Brothers, a Peace Corps training officer, a horseshoer, and has taught history at the University of New Mexico. Simmons is probably the only professional farrier in the Southwest with a Ph.D. He now lives in Cerrillos, New Mexico in an adobe house he built himself, and concentrates on horses, mules, research, and writing. He is at work on his next book, Trailing the Long-Ears: An Informal History of Mules and Burros in the Southwest.