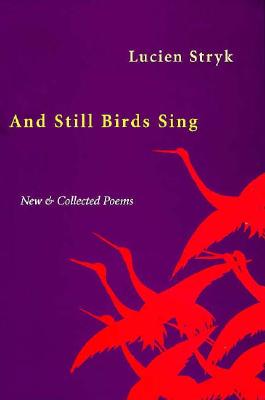 Written over a career that spans five decades, "And Still Birds Sing" is the masterwork of a major voice in American poetry.
Bringing together his previously collected poems as well as the three books published since then, a sampling of his renowned translations of haiku, and a generous number of previously unpublished new poems, this latest collection by poet and translator Lucien Stryk is evidence of the popular and critical acclaim for an important contributor to twentieth-century letters.
Stryk's work offers an intimate autobiography, at the same time giving a strong sense of the nature of our age, its ups and downs, despairs and promises, recorded with the permanence that only fine poetry can assure.
Writing in "Contemporary American Poetry," A. Poulin, Jr. said, The moral grandeur of Stryk's poetry emerges specifically from his ability to reveal, to accept, and to forgive even the darker edges of human experience, because to do so is to awaken to, and to be fully aware of, our own most profound humanity that is akin to Whitman's assertion nothing human is alien to me.
In "And Still Birds Sing," Stryk's life's work in poetry states and restates that assertion, making it his own.

Lucien Stryk is the prize winning author and editor of more than two dozen volumes of poetry, translations, and edited collections."
Loading...
or
Not Currently Available for Direct Purchase