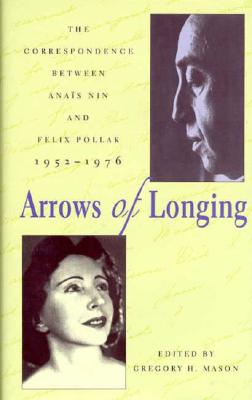 The Correspondence between Anaïs Nin and Felix Pollak, 1952-1976

"What moving poems you fashion out of your sadness. Beautiful, wistful poems of deep feeling. You have not lost your gift. What a pair we are. I have been fighting cancer for six months. May be well in August. I will read your poems to my students." -- Anaïs Nin to Felix Pollak

In the winter of 1951-52, Anaïs Nin was a writer in despair. More than a dozen publishing houses had rejected her new novel, A Spy in the House of Love, and Nin became desperate for literary acceptance. Encouragement came from an unexpected source. Felix Pollak, an Austrian emigré and Rare Book Librarian at Northwestern University, had been entrusted with the task of acquiring some of Nin's manuscripts for the library. A longtime admirer of her work and himself an emerging poet, Pollak wrote Nin a letter of appreciation, and this quickly blossomed into an animated and devoted correspondence.

Through this correspondence of over 200 letters, both writers present nuanced self-portraits that shed fresh light on their complex personalities. Their frank and open exchange of views on life and art spanned twenty-five years. Editor Gregory H. Mason provides us with a unique insight into the development of these two writers as they grow in their friendship and as artists.

Anais Nin the celebrated novelst, diarist, and short story writer was born in France and spent her childhood in various parts of Europe and in New York. Nin returned to New York just before the outbreak of World War II, and she spent the rest of her life living there and in Paris and Los Angeles. Her work is characterized by a interest in the subconscious. Her five novels in the Cities of the Interior series focus on different female types and follow their lives through lovers, art, and analysis. In 1973 Nin received an honorary doctorate from Philadelphia College of Art. She was elected to the National Institute of Arts and Letters in 1974."

Praise For Arrows Of Longing: The Correspondence between Anaïs Nin and Felix Pollak, 1952-1976…

"This book is both useful and entertaining, because it offers a discussion of the writers’ aesthetic beliefs while revealing the intimate thoughts of two romantic, creative individuals. Recommended."