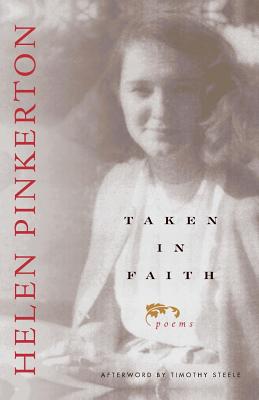 In 1967, Yvor Winters wrote of Helen Pinkerton, “she is a master of poetic style and of her material. No poet in English writes with more authority.” Unfortunately, in 1967 mastery of poetic style was not, by and large, considered a virtue, and Pinkerton's finely crafted poems were neglected in favor of more improvisational and flashier talents. Though her work won the attention and praise of serious readers, who tracked her poems as they appeared in such journals as The Paris Review, The Sewanee Review, and The Southern Review, her verse has never been available in a trade book. Taken in Faith remedies that situation, bringing Pinkerton's remarkable poems to a general audience for the first time.

Even her very earliest works embody a rare depth and seriousness. Primarily lyrical and devotional, they always touch on larger issues of human struggle and conduct. More recent poems, concerned in part with history, exhibit a stylistic as well as a thematic shift, moving away from the rhymed forms of her devotional works into a blank verse marked by a quiet flexibility and contemplative grace.

Like Virginia Adair, another poet who waited long for proper recognition, Pinkerton speaks as a woman who has lived fully and observed acutely and who has set the life and observations down in memorable verse. Taken in Faith represents a half-century of her poetic efforts.

Praise For Taken In Faith: Poems…

“Her poetry, in form and in content, is both traditional and original. In the best sense of the word, it is poetic.”—John Baxter, Sequoia

“However belated the publication of this book, time is on Pinkerton's side.”—Timothy Steele

Helen Pinkerton is a poet, essayist, and scholar of American and English literature. The 1999 winner of the Allen Tate Poetry Prize, she has taught poetry, fiction, and the writing of poetry at Stanford, Michigan State, and other universities. She lives in Palo Alto, California.