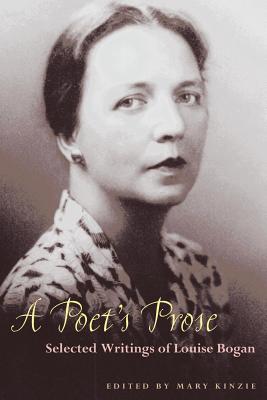 Although best known as a master of the formal lyric poem, Louise Bogan (1897- 1970) also published fiction and what would now be called lyrical essays. A Poet's Prose: Selected Writings of Louise Bogan showcases her devotion to compression, eloquence, and sharp truths. Louise Bogan was poetry reviewer for the New Yorker for thirty-eight years, and her criticism was remarkable for its range and effect. Bogan was responsible for the revival of interest in Henry James and was one of the first American critics to notice and review W. H. Auden. She remained intellectually and emotionally responsive to writers as different from one another as Caitlin Thomas, Dorothy Richardson, W. B. Yeats, Andre Gide, and Rainer Maria Rilke. Bogan's short stories appeared regularly in magazines during the 1930s, penetrating the social habits of the city as well as the loneliness there. The autobiographical element in her fiction and journals, never entirely confessional, spurred some of her finest writing. The distinguished poet and critic Mary Kinzie provides in A Poet's Prose a selection of Bogan's best criticism, prose meditations, letters, journal entries, autobiographical essays, and published and unpublished fiction.

Louise Bogan, poetry reviewer for the New Yorker for thirty-eight years, won the Bollingen Prize in 1954 for her collected poems. She is the subject of the Pulitzer Prize-winning biography by Elizabeth Frank, Louise Bogan: A Portrait. Editor Mary Kinzie is a poet and critic who teaches in the creative writing program she founded at Northwestern University. Her books of poetry include Summers of Vietnam and Autumn Eros. Most recently, her collection Drift was published by Alfred A. Knopf.
or
Not Currently Available for Direct Purchase
Copyright © 2020 American Booksellers Association