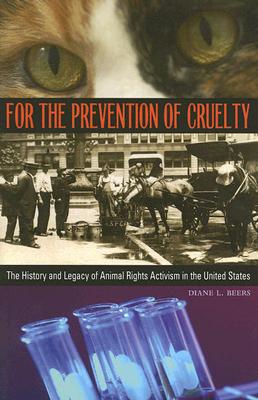 For the Prevention of Cruelty (Hardcover)

Animal rights. Those two words conjure diverse but powerful images and reactions. Some nod in agreement, while others roll their eyes in contempt. Most people fall somewhat uncomfortably in the middle, between endorsement and rejection, as they struggle with the profound moral, philosophical, and legal questions provoked by the debate. Today, thousands of organizations lobby, agitate, and educate the public on issues concerning the rights and treatment of nonhumans.
For the Prevention of Cruelty is the first history of organized advocacy on behalf of animals in the United States to appear in nearly a half century. Diane Beers demonstrates how the cause has shaped and reshaped itself as it has evolved within the broader social context of the shift from an industrial to a postindustrial society.
Until now, the legacy of the movement in the United States has not been examined. Few Americans today perceive either the companionship or the consumption of animals in the same manner as did earlier generations. Moreover, powerful and lingering bonds connect the seemingly disparate American Society for the Prevention of Cruelty to Animals of the nineteenth century and the People for the Ethical Treatment of Animals of today. For the Prevention of Cruelty tells an intriguing and important story that reveals society's often changing relationship with animals through the lens of those who struggled to shepherd the public toward a greater compassion.

Diane L. Beers is an associate professor of history at Holyoke Community College, where she teaches social, environmental, and African American history.

Praise For For the Prevention of Cruelty: The History and Legacy of Animal Rights Activism in the United States…

Publishers WeeklyMay 8, 2006*Starred Review*Destined to become a classic in its field, historian Beers's study of the animal advocacy movement in the U.S. since the ASPC's founding in 1866fills a glaring historical gap with exceptional style, accuracy and insight. Beers observes that while involvement in the animal rights movement has exploded since the 1975 publication of Peter Singer's Animal Liberation, with more than 7,000 organizations today representing more than10 million members, the movement has "historical amnesia." To counter this, she shows how animal rights activism "has been far more successfulhistorically and has had a far greater impact on society than previously suggested." Displaying an impressive mastery of social and environmentalcontexts, the author reviews a range of activism, from the influence of the abolitionist movement on the "radical humanists" working for theemancipation of animals in the post-Civil War era, through the antivivisection movement of the late 19th century (which numbered Mark Twain as a member), to the impact of historical legislation such as the 1958 federal Humane Slaughter Act. Beers delivers a superbly convincing account of how early animal advocates "made the developments of 1975 and the years thereafter possible." B&W illus. (July)

Diane Beers’s history of animal advocacy in the United States isilluminating, authoritative, and highly readable. The story she tells is ofa movement that on the basis of a surprising depth of popular support hasmade steady if uneven progress, but has shown a lamentable tendencyto splinter and divide.”--J. M. Coetzee

To understand the contemporary animal protection movement, there is nobetter place to start than Diane Beers’s For the Prevention of Cruelty. Sherecounts the fascinating history of the anticruelty movement with insightand wisdom but also with criticism when it is deserved.”--Kim W. Stallwood, Co-executive Director, Animals and Society Institute