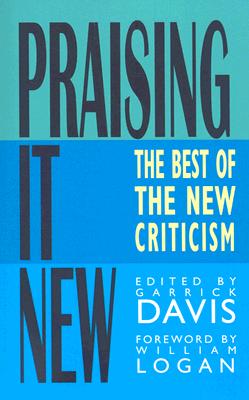 The Best of the New Criticism

Marked by a rigorously close textual reading, detached from
biographical or other extratextual material, New Criticism was the
dominant literary theory of the mid-twentieth century. Since that
time, schools of literary criticism have arisen in support of or in opposition to
the approach advocated by the New Critics. Nonetheless, the theory remains
one of the most important sources for groundbreaking criticism and continues
to be a controversial approach to reading literature.
Praising It New is the first anthology of New Criticism to be printed in fifty
years. It includes important essays by such influential poets and critics as
T. S. Eliot, Ezra Pound, John Crowe Ransom, Allen Tate, Yvor Winters,
Cleanth Brooks, R. P. Blackmur, W. K. Wimsatt, and Robert Penn Warren.
Together, these authors ushered in the modernist age of poetry and criticism
and transformed the teaching of literature in the schools. As the American
poet and critic Randall Jarrell once noted: “I do not believe there has been another
age in which so much extraordinarily good criticism of poetry has
been written.”
This anthology now makes much of the best American poetry criticism available
again, and includes short biographies and selected bibliographies of its
chief figures. Praising It New is the perfect introduction for students to the
best American poetry criticism of the twentieth century.

Garrick Davis is the founding editor of the Contemporary
Poetry Review, the largest online archive of poetry criticism in the world (cprw.com). His poetry
and criticism have appeared in the New Criterion,
Verse, the Weekly Standard,McSweeney’s, and the New
York Sun. He also edited Child of the Ocmulgee: the Selected
Poems of Freda Quenneville. He is the literature
specialist of the National Endowment for the Arts in
Washington DC.
Loading...
or
Not Currently Available for Direct Purchase