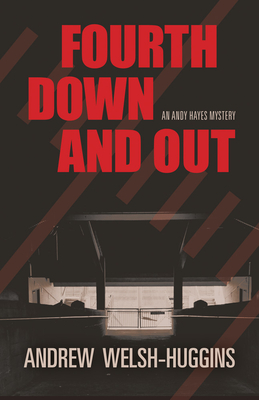 Fourth Down and Out

The job seems easy enough at first for private investigator Andy Hayes: save his client’s reputation by retrieving a laptop and erasing a troublesome video from its hard drive. But that’s before someone breaks into Andy’s apartment in Columbus; before someone else, armed with a shotgun, relieves him of the laptop; and before the FBI suddenly shows up on his doorstep asking questions.

Soon, there’s a growing list of people with a claim on the computer, all of them with secrets they don’t want uncovered. When one of those people ends up dead, Andy has his hands full convincing authorities he’s not responsible, while trying to figure out who is—and who’s got the laptop—before someone else dies. Soon the trail leads to the last place Andy wants to go: back to Ohio State University, where few have forgiven him for a mistake he made two decades earlier in his days as the Buckeyes’ star quarterback. That misjudgment sent him on a downward spiral that cost him a playing career, two marriages, several wrecked relationships, and above all his legacy in Ohio’s capital city, where the fortunes of the OSU team are never far from people’s minds.

As Andy tracks a laptop and a killer from the toniest of the city’s suburbs to its grittiest neighborhoods, he must confront a dark figure from his past and prove that this time he won’t drop the ball.

“Welsh-Huggins (does) a masterful job with the book, an entertaining, easy-to-read tale worthy of Robert B. Parker.”—Columbus Dispatch

“Like any other good detective novel, Fourth Down and Out has murder, dames, snappy dialogue and a tough, weary protagonist. This most entertaining fiction debut shows that noir can come in scarlet and gray.”—Akron Beacon-Journal

“With a wealth of Columbus-area color, an intriguing private detective with a shady past and more twists than many of Ohio’s back roads, Fourth Down and Out represents a top-notch opener for a writer who seems destined to score big.”—Richmond Times-Dispatch

“Midwesterners and football fans will find the most enjoyment in Fourth Down and Out, but even for private eye fans at large, this is a promising new series with a lot of charm.”—Black Heart Magazine

“Fourth Down And Out is a tall, frosty stein of Middle-American noir, backed with a healthyshot of wry.”—Bill Osinski, author of Guilty by Popular Demand and Ungodly

“Reporter Welsh-Huggins’s...debut, the first in a series, introduces Andy Hayes, a Columbus, Ohio, PI, and—for reasons explained late in the story—perhaps the most reviled former football player in Ohio State history…. The author’s use of iconic Columbus landmarks and lots of Buckeye lore will appeal to O.S.U. fans.”— Publishers Weekly

“Midwesterners and football fans will find the most enjoyment in Fourth Down and Out, but even for private eye fans at large, this is a promising new series with a lot of charm.”
—Black Heart Magazine