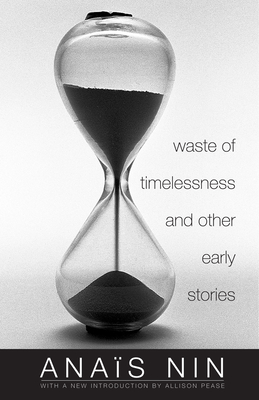 Waste of Timelessness and Other Early Stories

Written when Anaïs Nin was in her twenties and living in France, the stories collected in Waste of Timelessness contain many elements familiar to those who know her later work as well as revelatory, early clues to themes developed in those more mature stories and novels. Seeded with details remembered from childhood and from life in Paris, the wistful tales portray artists, writers, strangers who meet in the night, and above all, women and their desires.

These experimental and deeply introspective missives lay out a central theme of Nin’s writing: the contrast between the public and private self. The stories are taut with unrealized sexual tension and articulate the ways that language and art can shape reality. Nin’s deft humor, ironic wit, and ecstatic prose display not only superb craftsmanship but also the author’s own constant balancing act between feeling and rationality, vulnerability and strength. Perhaps more than any other writer of the twentieth century, she mastered that act and wrote about it on her own terms, defying the literary and social norms of the time.