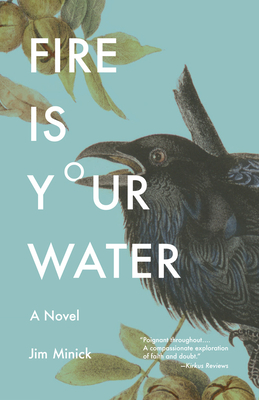 Fire Is Your Water (Paperback)

Sacred chants are Ada Franklin’s power and her medicine. By saying them, she can remove warts, stanch bleeding, and draw the fire from burns. At age twenty, her reputation as a faith healer defines her in her rural Pennsylvania community. But on the day in 1953 that her family’s barn is consumed by flame, her identity as a healer is upended. The heat, the roar of the blaze, and the bellows of the trapped cows change Ada. For the first time, she fears death and—for the first time—she doubts God. With her belief goes her power to heal. Then Ada meets an agnostic named Will Burk and his pet raven, Cicero.

Fire Is Your Water is acclaimed memoirist Jim Minick’s first novel. Built on magical realism and social observation in equal measure, it never gives way to sentimentality and provides an insider’s glimpse into the culture of Appalachia. A jealous raven, a Greek chorus of one, punctuates the story with its judgments on the characters and their actions, until a tragic accident brings Ada and Will together in a deeper connection.

Jim Minick is the author of five books, including The Blueberry Years, winner of the Best Nonfiction Book of the Year from the Southern Independent Booksellers Association. His work has appeared in Oxford American, Shenandoah, Orion, The Sun, and elsewhere. He teaches at Augusta University and Converse College.


Praise For Fire Is Your Water: A Novel…

“Minick’s coming-of-age novel is poignant throughout. The supporting players are as caringly drawn as the protagonists.… A compassionate exploration of faith and doubt.”—Kirkus Reviews

“Fire Is Your Water is a most remarkable story of devotion, trust, healing, and misfortune—and of a skeptical raven misnamed Cicero. The personalities portrayed are of their time and place and yet before and beyond them. Minick vividly demonstrates how daily experience transcends itself. And it’s a genuine love story, the best kind of story there is.”—Fred Chappell

“The award-winning essayist/memoirist Minick (Blueberry Years) has crafted an outstanding first novel full of appealing characters and an inventive plot based on true events. This belongs at the top of every spring reading list.”—Library Journal starred review

“Compassionate throughout … a moving exploration of faith and doubt.”—Kirkus Reviews

“[Fire Is Your Water] is both rich and rewarding. …This is not a novel about a specific time or place, so much as it’s a novel about the nature of love, what it means to have faith, and ultimately, what it means to be those flawed beings that we call human—creatures that, in the end, earn Cicero’s grudging respect. In the context of Minick’s novel, that is no small achievement.”—North American Review
or
Buy Here
Copyright © 2020 American Booksellers Association