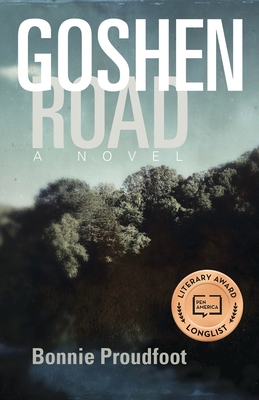 Goshen Road is an elegiac, unvarnished, and empathetic portrait of one working-class family over two decades in rural West Virginia, with sisters Dessie and Billie Price as its urgently beating heart. Bonnie Proudfoot captures them, their husbands, and their children as they balance on the divide between Appalachia old and new, struggling for survival and reconciling themselves with past hurts and future uncertainties as the economy and culture shift around them.

The story opens in 1967 with a logging accident and the teenaged Lux Cranfield’s headlong plunge into the courtship of Dessie—a leap he takes not only in the wake of his near-death experience but to exchange his bitter home life for a future with the Prices, a family that appears to have the stability and peace that his own lacks. Within the year Lux and Dessie marry. Meanwhile, Dessie’s rebellious younger sister, Billie, fights her way through adolescence with an eye toward an escape of her own, only to land with Lux’s friend Alan Ray Munn and settle into a life of hardship. Ultimately, the voices and passions of Dessie, Billie, Lux, Alan Ray, and the Cranfield children build on one another to create an unforgettable chorus about the promises and betrayals of love—and what it takes to preserve a family when everything else is uncertain.

Bonnie Proudfoot moved to the Appalachian region in 1979 and has lived there since, teaching for many years at Hocking College in Nelsonville, Ohio. She is a fiction writer, a poet, and a glass artist. This is her first book.


Praise For Goshen Road: A Novel…

“Proudfoot is a talented wordsmith, and her lyrical writing is the highlight of her debut novel. She details the landscape of the mountains and dirt roads with tenderness and detail, and creates complex, rich characters.”—Booklist

“Goshen Road is rich with life and characters who command our attention. These beautiful intertwined stories introduce a wise and wonderful voice.”—Gail Galloway Adams, author of The Purchase of Order

“Goshen Road is a rich, multigenerational tale exploring women’s expanding roles in a rural environment. The women are afforded few opportunities here, and they often settle for much less than they deserve, but they are resourceful and ultimately as resilient and reliable as the untamable land.”—Marie Manilla, author of Weatherford Award-winning The Patron Saint of Ugly

“Bonnie Proudfoot writes the kind of book that means something, a book that carries weight in a way that only serious fiction can. Her words delight and move, but they do much more than that. She interrogates the truth of the people and place of Appalachia. Her debut should be savored by those who admire timeless fiction.”—Charles Dodd White, author of In The House of Wilderness

“It takes no more than the opening sentence of Goshen Road to bring vividly to life the ruggedly forested mountains of West Virginia and the resolute people who make their lives among them. Told alternately through the voices of a family, Proudfoot does not merely allow readers to witness her characters’ lives, but brings us among them as visitors. Her characters are not the “other,” an archetype that is the bane of Appalachian Literature; they are not the meth addicts or oxycontin dealers that pollute so much of what is written about our region today. The community of Goshen Road is economically depressed, but it is not damned by impoverishment; its citizens do not suffer from ‘learned helplessness.’ They care for family and community and in their lives evoke the heroics of everyday struggle.”—Chris Holbrook, author of Upheaval: Stories
or
Buy Here
Copyright © 2020 American Booksellers Association