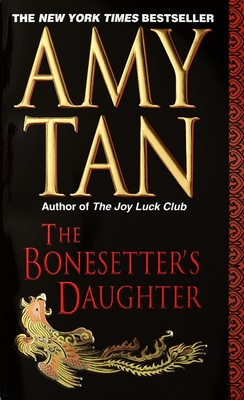 “TAN AT HER BEST . . . Rich and hauntingly forlorn . . . The writing is so exacting and unique in its detail.”
–San Francisco Chronicle

“AMY TAN [HAS] DONE IT AGAIN. . . . The Bonesetter’s Daughter tells a compelling tale of family relationships; it layers and stirs themes of secrets, ambiguous meanings, cultural complexity and self-identity; and it resonates with metaphor and symbol.”
–The Denver Post

“POIGNANT AND BITTERSWEET . . . A STORY OF SECRETS AND REVELATION, ESTRANGEMENT AND RECONCILIATION.”
–Rocky Mountain News

Amy Tan is the author of The Joy Luck Club, The Kitchen God’s Wife, The Hundred Secret Senses, and two children’s books, The Moon Lady and The Chinese Siamese Cat, which has been adapted as Sagwa, a PBS series for children. Tan was also the co-producer and co-screenwriter of the film version of The Joy Luck Club, and her essays and stories have appeared in numerous magazines and anthologies. Her work has been translated into more than twenty-five languages. Tan, who has a master’s degree in linguistics from San Jose University, has worked as a language specialist to programs serving children with developmental disabilities. She lives with her husband in San Francisco and New York.
Loading...
or support indie stores by buying on