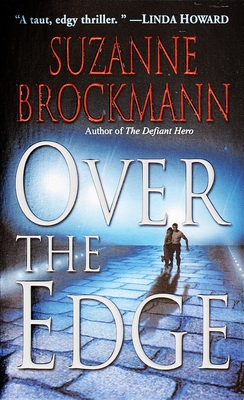 Over the Edge (Troubleshooters #3)

Suzanne Brockmann has taken romantic suspense by storm with her action-packed thrillers. Now she has written the most gripping novel of her career–an unforgettable story of an explosive hostage situation in which two people are caught between the call of duty and the lure of destiny.

Her passion is flying. As one of the best helicopter pilots in the naval reserves, Lieutenant Teri Howe is strong, dedicated, and highly skilled–until a past mistake surfaces, jeopardizing everything she’s worked for.

Rock steady Senior Chief Stan Wolchonok has made a career of tackling difficult challenges. So it’s no surprise when he comes to Teri’s aid, knowing that his personal code of honor–and perhaps his heart–will be at risk. But when a jet carrying an American senator’s daughter is hijacked, Stan’s unflinching determination and Teri’s steadfast courage are put to the ultimate test. The rescue mission will be daring and dangerous. But somewhere between peril and resolution, the line between friends and lovers begins to blur, pushing both their lives over the edge. . . .


Praise For Over the Edge (Troubleshooters #3)…

"Thanks to Suzanne Brockmann's glorious pen, we all get to revel in heartstopping adventure and blistering romance."
--Romantic Times

The Defiant Hero
Selected by the Doubleday Book Club

"A smart, thrilling keeper . . . This is one to recommend heartily to friends. . . . While heating tension and passion to the boiling point, Brockmann firmly squashes the cliche of military men with hearts of stone and imbues her SEALs with honest emotional courage."
--Publishers Weekly

"[Brockmann] takes a quantum leap forward with a novel that is richly textured, tenderly touching and utterly exciting. This is one book you will be unable to put down or forget!"
--Romantic Times

"Count on Ms. Brockmann to deliver a thoughtful and tightly woven plot with plenty of action."
--The Romance Journal

After childhood plans to become the captain of a starship didn’t pan out, Suzanne Brockmann took her fascination with military history, her respect for the men and women who serve, her reverence for diversity, and her love of storytelling and explored brave new worlds as a New York Times bestselling romance author. Over the past twenty years, she has written more than fifty novels, including her award-winning Troubleshooters series about Navy SEAL heroes and the women—and sometimes men—who win their hearts. In addition to writing books, Suzanne Brockmann has co-produced a feature-length movie, the award-winning romantic comedy The Perfect Wedding, which she co-wrote with her husband, Ed Gaffney, and their son, Jason. She has also co-written a YA novel, set in the world of her paranormal Fighting Destiny series, with her daughter, Melanie. Find Suzanne Brockmann on Facebook, follow her on Twitter, and visit her website to find out more about upcoming releases and appearances.
Loading...
or
Not Currently Available for Direct Purchase